Music, Theatre and Performing Arts & the College of Education

A $26 million project building recording studios and refurbishing existing buildings is expected to create multiple benefits for both the University and the community.

Work started in 2018 on the new building in a car park beside the Robertson Library, behind the Mary Hopewell Theatre and College auditorium, in Union Street East. 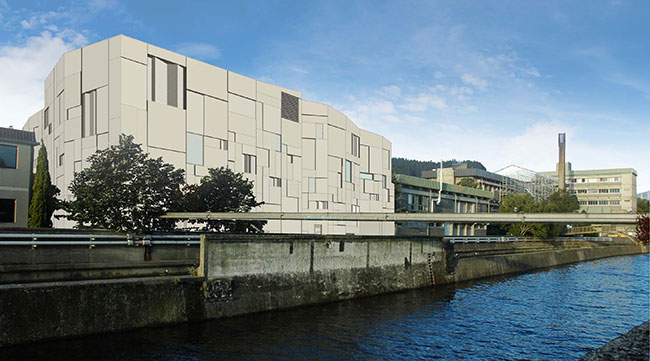 The project will be completed in early 2020 and will provide: 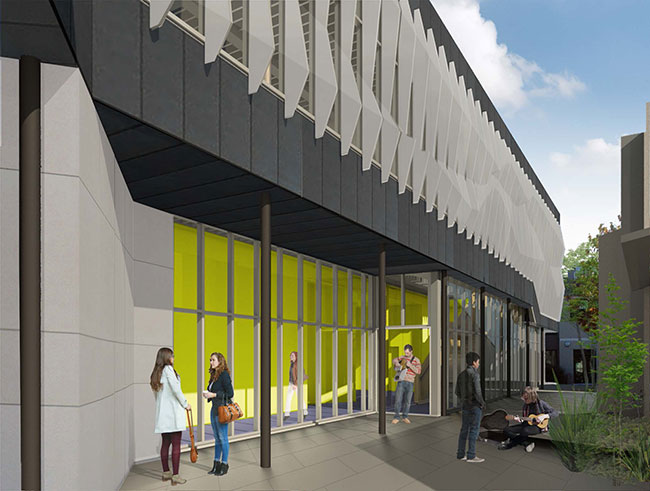 The new two-storey building will have nine purpose-built studios and music teaching/practice rooms.

The main studio will be two-storeys. Its ground floor will house the the main control room, two isolation booths for recording and the main recording space - capable of accommodating an orchestra and of hosting performances for an audience of more than 100.

There will be a gantry (walkway) around the upper interior walls. The rails will be used to hang microphones, lighting, video screens, and speakers, and will have positions for cameras.

The other studios and teaching/practice rooms will be on the first floor.

Parts of the first floor of the western end of the neighbouring University of Otago College of Education Music Block will be renovated, including the existing Music Suite. The new spaces will include a flexible Theatre and Music studio, a smaller teaching room, a guitar lab, four music and theatre rehearsal/practice rooms, a workshop and spaces for storing instruments and equipment.

The teaching room, music practice room and studios can be routinely linked simultaneously to share video, data and audio - or just some of those spaces can link, or they can all be busy with different uses. The community and commercial interests can also apply to use those spaces.

The project will create more opportunities to collaborate on teaching, research performance, and production - across the department by consolidating staff and students, with the college through sharing premises, with the wider University and the community by actively encouraging people to come to the new facility, and nationally and internationally through easy access to ultra-fast technology. 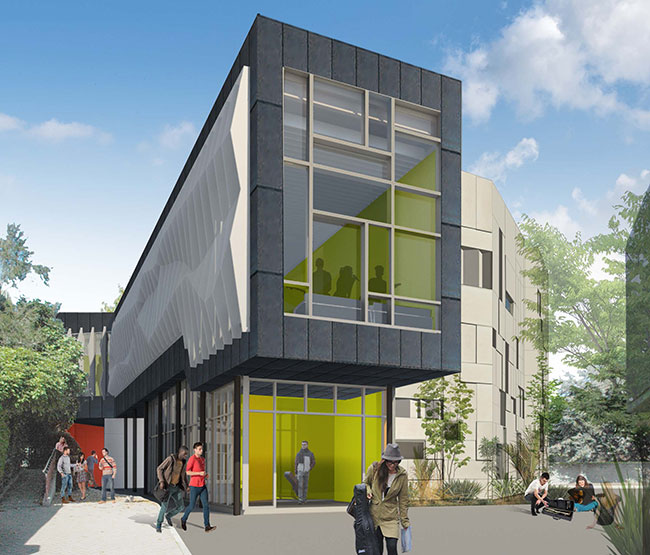 At the College, the project involves internally reconfiguring and refurbishing the Teaching Wing.

That will create a hub for technology and science (previously in the Music Block), visual arts and food technology - reflecting the change to integrated teaching environments by letting classes move easily from one specialised room to another, even during a single class.

The new facilities will also reflect changes in digital technology and teaching methods.

Maths will move from the ground floor of the Teaching Wing to the first floor, and a ground-floor extension will link the Teaching Wing and the eastern end of the existing Music Block, creating a circulation area.

The Tower Block's staff offices will be refurbished internally as well.

Both the new building and existing buildings will be added to the University's Future State Network, with desktop computer connections of up to a gigabit a second so large amounts of data can move very quickly.

The college lecture theatres will also have Wi-Fi for the first time.

Fire protection systems and seismic strengthening will be enhanced in existing buildings as needed as well.

The University considers the East Precinct a key area for the future development of the Division of Humanities and the relocation of the Music, Theatre and Performing Arts Te Kāhui Tau is the first step towards that future.

Some of the Department's staff, students and activities are already based in college buildings.

The existing recording studio at 180 Albany Street building was constructed in 1967 to house the New Zealand Broadcasting Corporation (NZBC), so was designed for broadcasting. It was based on Abbey Road Studios in England, where the Beatles recorded.

180 Albany Street once provided a mix of studio, office, teaching and research spaces - for performances, practices and recording - but is currently only used for studio production and large-group contemporary music teaching.

The building contains asbestos. Independent consultants have determined it is safe for staff and students to use in the interim, with safety measures in place that include prohibiting access to some areas and relocating activities that can be done elsewhere.

180 Albany Street will be demolished once the new building is constructed and operational. Demolition is the most cost-effective option for dealing with the asbestos, and will free that site for development.

Because the new building is being constructed on a car park, about 45 parking spaces will be lost, but 150 new spaces have been created in a new car park on the former Wickliffe site, on the corner of Clyde and Albany Streets.