Former Researcher at the Centre for Sustainability

Now based at Wageningen University, Netherlands 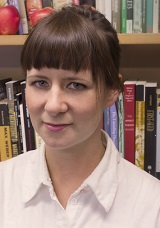 Katharine’s main focus is on the relationship between the economy, social organization, and the environment in the food production. She is particularly interested in how people manage the tensions between modern capitalist markets and the dynamic spontaneity of environmental life. Her work has largely been on apples, and the relationships between redness, pack-houses, and retail (or trees, growers, and markets). Her approach could be described as a post-human political economy.

Katharine is now based in the Netherlands at Wageningen University.