When Did We See You Naked? 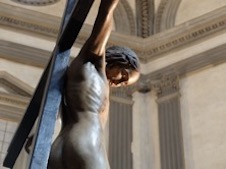 This is a Centre for Theology and Public Issues Leading Thinker project, led by Professor David Tombs. David will be working with Dr Rocio Figueroa Alvear at Good Shepherd College, Auckland, Dr Jayme Reaves and other international partners.

How can churches and church agencies offer an appropriate and effective response to sexual violence in its many different forms?

This project will examine the opportunities and challenges of better faith-based responses to sexual violence, and how biblical and theological resources can guide and support these. Areas of particular importance include how churches might address victim blaming and secondary victimisation.

As a focal point, the work will take up the question posed in Matthew 25 'When Did We See You Naked?' (Matthew 25.38) and build on earlier work including David's article "Crucifixion, State Terror, and Sexual Abuse" (1999), his 2015 Inaugural Professorial Lecture, his contributions to the Shiloh Project, and the 2016 CTPI project by David and Rocío on 'Listening to Male Survivors of Sexual Abuse'.

The next stage of the project will explore Mark 15.16-24 and other texts to address the stripping and forced naked exposure of Jesus prior to, and during, crucifixion. It will use facilitated contextual bible studies to investigate why the sexualised element of this humiliation is rarely named or seen as important, and how acknowledgement of these texts might contribute to better church responses to sexual violence.

David Tombs.
‘How Recognising Jesus as a victim of sexual abuse might help shift Catholic culture’. The Conversation, 13 March 2019.

Rocío Figueroa Alvear and David Tombs.
Recognising Jesus as a Victim of Sexual Abuse: Responses from Sodalicio Survivors in Peru. Dunedin: Centre for Theology and Public Issues, University of Otago, 2019.

Katie B Edwards and David Tombs.
#HimToo – why Jesus should be recognised as a victim of sexual violence. The Conversation, 23 March 2018.

The project is funded through the University of Otago Leading Thinkers Initiative, which was established under the government's Partnerships for Excellence Framework to support world-class scholarship at Otago. 3 October 2018.

19 November 2018
David Tombs, ‘'When Did We See You Naked?' Re-reading the Stripping of Jesus in the Context of #MeToo’, Society of Biblical Studies Annual Meeting, Denver.

7 December 2018
David Tombs, ‘Crucifixion, Impalement, and the Palatine Graffito’ at ‘Joint Symposium on Religion and Violence’, Center of Theological Inquiry and Centre of the Study of Religion, Princeton.