Otago staff recognised for passion & for making a difference 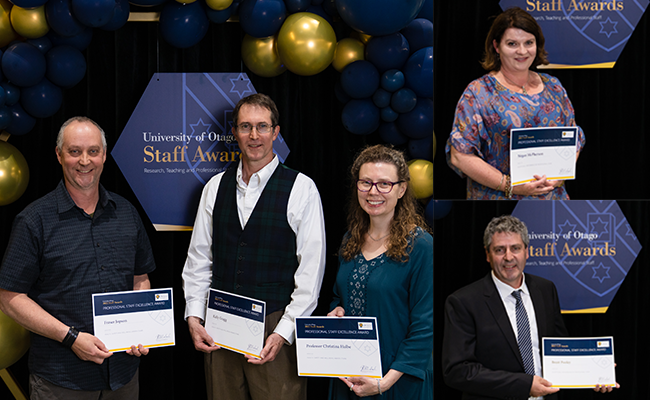 University of Otago staff received awards for their work at a ceremony this week.

Making a difference and enjoying their work were common themes among those recognised at the 2022 University of Otago Staff Awards.
As they were in 2021, the previously separate teaching, research and professional staff awards events were combined into one evening of celebration of staff at the Otago Business School on 23 November.

The awards included five for University of Otago professional staff. Winners were nominated for their commitment to their job, their passion and their willingness to make positive change. 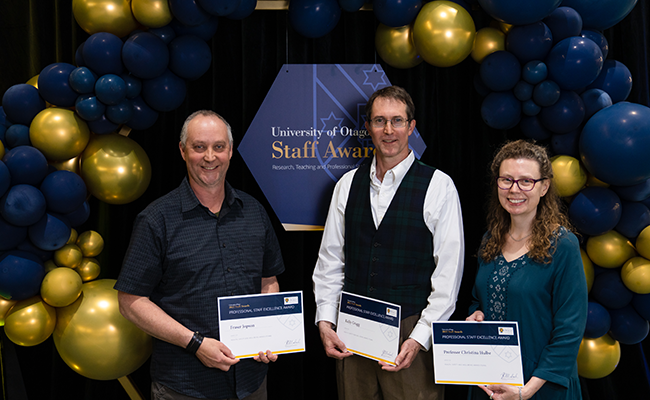 On behalf of team-mates, Lecturer Emily Tidey, Senior Professional Practice Fellow Fraser Jopson, and Scientific Officer Kelly Gragg, Professor Christina Hulbe said it felt good to be recognised for a project they had put a lot of thought and effort into over the years.
“We’ve had a mentoring system in the School for a long time, and our students’ association is very active, but we wanted to be more proactive about wellbeing.
“We wanted to amplify the wellbeing message that students hear in their first year at Otago and bring it home to our whare and our tauira.”
Christina says the team enjoys working together to do something in a different and better way.
“We’ve all been where our students are now, but not always with the kind of support we think students deserve."
The team was nominated by Associate Professor Antoni Moore and Dr Mick Strack, both of the School of Surveying Te Kura Kairūri.
The pair said the team’s priority was the mental health and wellbeing of all students in the School of Surveying. Since 2018 the team has been running a seminar series to welcome 200-level students back at the start of the academic year, emphasising whakawhanaungatanga/community and māhirahira/curiosity. They talk about managing workload, maintaining balance, and taking care of each other, among other topics.
Christina adds, “We have appreciated and benefited from the support of others, like Te Whare Tāwharau and Silverline.”
While focussed on the 200-level, all students at Surveying were invited and some did attend to refresh their understanding at the start of the academic year.
Nominators said it is known that talking about challenges and experiences can help others to realise they are not alone and that it is okay to seek help or make changes to best support themselves.
The sessions showcase this positive message at what is often a challenging time in students' busy lives.
They noted the seminar series helped to break down barriers for students who might otherwise not come forward for help.
The nominators were not aware of any other academic unit offering a staff-organised course on wellbeing and study support for their undergraduate students.
“We are proud of the team’s work and that it is a direct response to consultation with our students.” 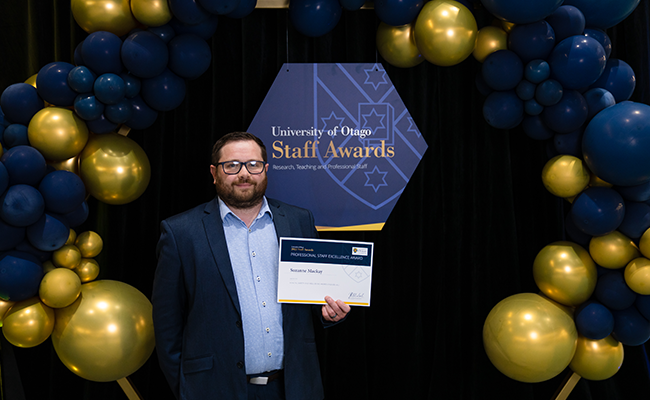 Mackay, a senior administrator in Student Experience, says receiving the award is “a delight”.
“It is so nice to be appreciated for something I have always enjoyed doing regardless of whether it is in my job description.”
She was excited about the funding associated with the award and hopes to direct it to an initiative which will benefit all staff.
“I really enjoy helping people, being a bit of a mother hen by nature,” she says.
She has worked with her colleagues to investigate near misses and accidents in her previous role as Department Health & Safety Officer (DSO) which has led to many improvements around the safety of campus environment.
“This has been very rewarding for me. Making a difference feels good.”
Mackay, who has been with the University for 36 years, was nominated by her colleagues Nevan Trotter and Khazima Tahir.
She has been involved in Health & Safety since 2001. She was DHSO in the Clocktower, then Department Health & Safety Administrator. More recently she has been a Worker Representative providing an extra avenue for people to raise any concerns around health & safety.
Her nominators said Mackay liked to help people and had a simple approach to health and safety that people understood and could take away and apply themselves.
As part of her role she raised concerns that many staff were having issues with their backs whilst moving heavy loads in a tight and narrow space.
Looking for a solution she played a major role in the design and implementation of a “roller” system for the transportation of heavy exam boxes - a system then rolled out around the University.
A bench roller system was designed to enable boxes to be placed on and rolled rather than carried. In addition, a load-levelling trolley (nick named “Big Red’) was purchased which enabled boxes to be lifted to the height of the rollers thus eliminating the need for heavy lifting.
Mackay has sat on a number of Health & Safety committees and has been involved in developing and revising the original Worker Participation Framework (2004, 2006), and as well as helping to develop the ISO 45001 Framework and a Health & Safety Management System. 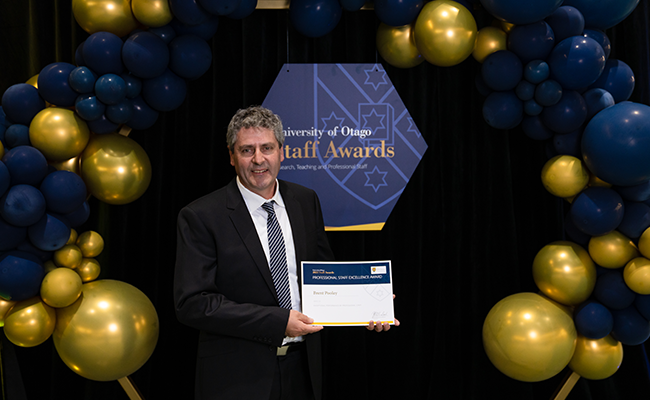 It was a “bit of a shock” to find out he had won the award, says Physical Geology laboratories manager Brent Pooley.
“It remains a little hard to comprehend.”
He is “very grateful” for the people who nominated him.
“I work in a department that is one of the best kept secrets in the university. The staff here have grown a fantastic culture of fun, teamwork, and problem solving, all underpinned by a strong work ethic.”
The culture made fieldwork and experimental builds for research some of the most rewarding projects he has been apart off.
“I also enjoy being a part of the wider community of staff and technicians in the university, on whom I rely heavily for advice and resources.
“It all helps to get the job done.”
One of several people putting their name to a joint nomination for Pooley, Associate Professor Andrew Gorman (Head of Department of Geology, 2021-present) said Pooley was someone who “just gets on with it”. He has been with the University for 37 years.
His role in the department, university and wider Earth science discipline was often behind the scenes, but without the critical contributions he made, things there would grind to a halt.
Previous department head Professor James White (2016-2020) said the Geology Department had an established tradition of “maximising the use of resources”.
Before expanding his engineering capabilities into new devices purpose-built or modified for experiments in the department, Pooley's mechanical skills were employed in keeping rock-processing equipment – saws, grinders, polishers, etc. – in running condition decades beyond their expected lives.
“He was the soul of re-use and upcycling before recycling, let alone letting things go to landfill,” Professor White said.
Not only were the devices Pooley developed and constructed fit for exactly the purposes requested, they almost always incorporated materials repurposed from more basic uses, or from previously decommissioned devices.
He often assisted with the department’s field teaching programme and had supported research projects outside his day job at field locations as far flung as Antarctica, the Subantarctic Islands and Fiordland.
Pooley completed a BSc in Geology (in 2006) during his “spare time”. In 2016, he was presented with the Kingma Award from the Geoscience Society of New Zealand, which is awarded annually to an outstanding New Zealand Earth science technician. This award recognised Pooley’s marked ability in his chosen field of employment and the notable contribution that he had made to the discipline. 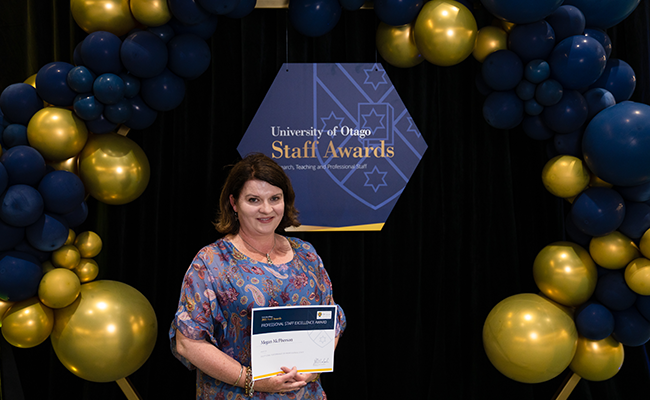 Director of Communications Megan McPherson says she was “surprised and moved” by how the award came about.
“My colleagues secretly nominated me and I was touched that they would do so.
“I work with a fantastic team in a dynamic environment. Te roopū pārokoroko is made up of highly skilled, supportive, collaborative and dedicated professionals.”
Te roopū pārokoroko makes a “huge difference” to how the University is presented, both to the outside world and within, she says.
She is “particularly proud” of the team getting the University through two years of COVID-19.
“The University appears in the media more than 35,000 times a year with an audience circulation of over 161 million - the highest for any University in Aotearoa.
“There is no shortage of good kōrero about our research and the achievements of our staff and students and, of course, there are always reactive situations to manage,” she says.
“Boredom is my enemy, and this job is never dull.”
On the flip-side of positive news, there are plenty of times when the team has helped students out who have found themselves in dreadful situations in the media, she says.
“It can be brutal out there and it is very rewarding to think that help from us can make a difference to a young person in the formative time of their life.”
McPherson, who has been with the University for 14 years, was nominated by Media Engagement manager Liane Topham-Kindley and Communications Advisory Services manager Fiona Clarkson.
In their nomination they said McPherson had led the University through a wide range of incidents and challenges for more than a decade, providing an exemplary service to the institution over that time and playing a core role in enhancing and protecting its reputation.
She had for years made herself available at all hours, ready to offer advice and solutions to manage all types of issues. She started her day before 7am and often worked long into the night, rarely taking time off to compensate and consistently goes above and beyond her job description.
McPherson had been at been at the forefront of all major events at the University in recent years, from the Christchurch earthquakes to multiple student deaths, the terror attacks, the recent graduation threat and more.
On any given day she was likely to be dealing with at least one reputation-risking event where the University was thrust into the public spotlight and was at the same time leading teams on a wide range of internal communication matters and public outreach.
She was highly regarded by her colleagues and those outside the University who she worked with and held herself to a high level of integrity, leading her team by learning and demonstrating from the top.
Her calm, methodical, reliable approach in an emergency was relied upon in times of crisis, and the communications’ team’s response to the pandemic, under her leadership, had been lauded. She was a clear, calm and dedicated leader, they said.