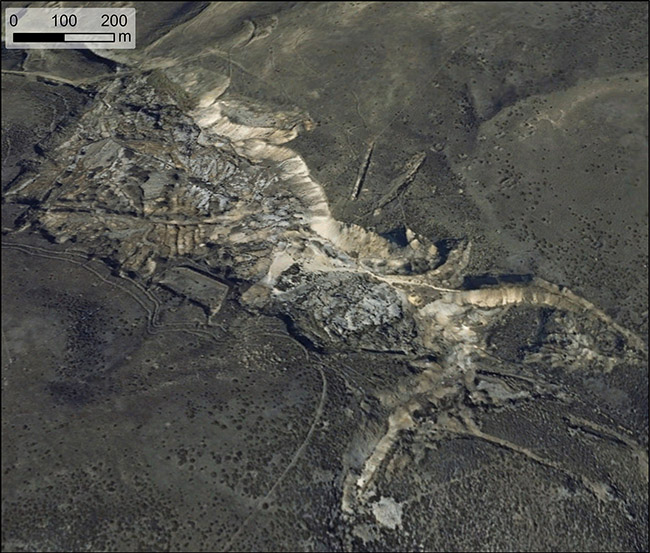 1. Old alluvial workings in 20 million year old gravels uplifted about 1000 metres above sea level on the Criffel Range near Wanaka. The old gravels have been mainly eroded away during uplift, leaving small remnants like this. Gold from eroded gravels remains in the soil on surrounding hillsides. 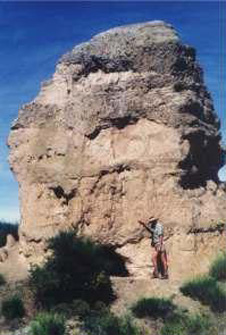 2. Pillar of brown schist gravels at the Matakanui gold workings near Alexandra. These gravels are less than 1 million years old, but have been cemented like concrete by groundwater. The gravels are now uplifted above surrounding river valleys. A mining claim boundary peg once stood at the top of this pillar. It was illegal to remove these surveyed pegs, so the miners worked around them. 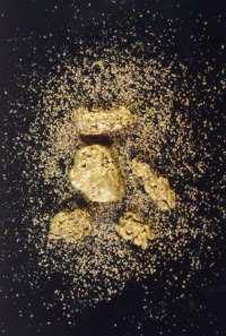 3. Alluvial gold collected by John Youngson in the Matakanui area. The fine gold in the background comes from remnants of 20 million year old gravels. The coarser nuggets come from young gravels, less than one million years old. The nuggets (largest one is nearly 1 cm across) have formed when groundwater in the gravels dissolved the small grains and deposited the gold again on larger grains nearby. In this way, larger grains keep growing, and smaller grains disappear. 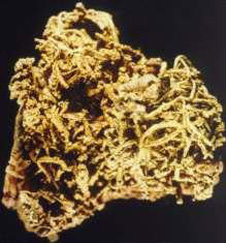 4. Wire gold nugget (2 cm across) which formed in soil on the Raggedy Range. The gold wires enclosed lumps of schist and clay from the soil as they grew.

Alluvial mining is technically simpler than hard-rock mining, so alluvial mining dominated Otago's gold mining history. Alluvial gold occurs as loose particles in the gravel, and is therefore easy to separate because of the high density of the gold. Many of the earliest alluvial mines were extremely rich (10's or even 100's of grams of gold per tonne of gravel), but most gravels had at most a few grams of gold per tonne. A wide variety of techniques have been tried over time, but all techniques focus on water-washing of the gold-bearing gravel in some way. The earliest miners lost at least half of their gold in the process, especially the smaller grains, because of inefficiencies in equipment and lack of skill. The presence of magnetite ("black sand") had considerable nuisance value and contributed to even lower efficiency. Magnetite is common in the Kawarau and its tributaries. Many of the previously worked gravels were successfully reworked whenever gold prices encouraged this.

Old gravel deposits at high levels in Central Otago have been cemented like concrete and were very hard to work. these required additional water for sluicing operations, and some, such as the Blue Spur gravel (Gabriel's Gully), were crushed before the gold was extracted with water.

Lack of water was a constant problem facing miners, because all alluvial mines required large quantities of water for processing the gravels. Otago is crossed by superbly-engineered water races which took water to ever-higher mines. However, many of the highest gravel deposits, or those in rugged and remote areas, have never been worked because of the lack of water. The advent of cheap and portable motor-driven pumps has made some of these areas more prospective. Saving small gold particles in alluvial gold mines remains a problem to the present day, and a solution to that problem could make some marginal deposits economic. When gravels contain less than 1 gram of gold per tonne of gravel, any loss of gold is noticed economically.

As old gravel deposits were uplifted by rising mountains, they were eroded and their gold was reworked through soil into streams and into younger gravel deposits. During this reworking, some gold is dissolved in water and transported short distances (metres) to be deposited on other gold particles. This results in a smaller number of larger particles in younger gravels, and some small nuggets have formed in this way. These younger gravels were easier to mine profitably, and some are still being worked in small operations in Central Otago.