Economies of Scale (gold in Otago) 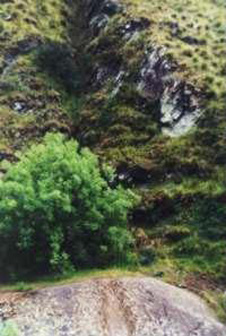 1. A hard-rock mine active last century at Macetown, near Queenstown. The quartz veins have been dug from the hillside above the tree. A tunnel entrance under the tree extends horizontally into the hillside, and waste rock from the underground workings forms a small heap in the foreground. These workings produced only a few kilograms of gold.

2. Nokomai alluvial gold mine, south of Queenstown (now closed and rehabilitated) had a 40 metre high gravel wall around the workings. The bottom 2 metres contained profitable gold, which was extracted on the floating plant (lower right). The plant was fed by a large digger whose bucket reached below water level to the gravel sitting on the schist bedrock.

3. Macraes open-pit hard-rock gold mine near Dunedin. The mine extends deep into the unoxidised schist, following a gold-bearing zone which slopes gently northeastwards. Each bench is 10 metres high. The thin zone of oxidised schist can be seen at the top of the pit

The early miners worked on a small scale as individuals or small groups on small alluvial claims in active rivers. As these became worked out, miners spread to higher gravel terraces and areas of more complex geology, and larger scale operations were required to justify the expense of getting water. This was especially apparent for cemented gravels where large scale sluicing operations were developed (e.g., Bannockburn). The dredges represented even larger scale technology, covering many square kilometres. The total reported historical alluvial gold production from Otago was about 240 tonnes but undeclared gold could make this a very much higher figure. Hard-rock mining was on a small scale only, and most mines consisted of a few hundred metres of tunnels and a stamping battery. The total historical hard-rock production from Otago was less than 20 tonnes of gold. Some of the ore production from several of the mines (e.g., Macraes, Bendigo, Barewood) was directed at scheelite, not gold.

Modern mining is at a much larger scale and can therefore work ground economically at very low grades. Modern alluvial mines such as Nokomai, Cromwell, Scotland Point, Island Block and Glenore (all closed) can work profitably where there is less than one gram of gold per tonne of gravel, after removing up to 40 metres of barren overburden gravel from thousands of square metres of land. A typical alluvial mine of this type would produce 1 tonne of gold a year and many of these last for less than 3 years. These mines combine up-dated dredge technology with modern large-scale earth-moving abilities.

The only modern hard-rock mine, at Macraes, is an extremely large operation compared to past hard-rock mines. It is open cut , not underground, and is substantially larger than modern alluvial open cut mines. The Macraes mine currently produces more than 3 tonnes of gold a year and has reserves in nearby deposits of about 150 tonnes of gold. The quartz veins have about 5 grams of gold per tonne, but large-scale mining procedures cannot separate small quartz veins from adjacent schist which dilutes the ore to an average of 1.6 grams gold per tonne.

The economics of hard rock gold mining in Otago have always been marginal, and many of the companies formed last century went bankrupt. An interesting economic question then arises: would it not be better to leave the gold in the ground for when technology and gold price are more favourable. However, the exponential effect of compound interest ensures that the cash flow generated by hard rock mines last century has had large downstream effects. Even very high gold prices in the future will not compensate for over 100 years of interest.