Otago graduate Dr Joshua Ramsay is a senior lecturer and researcher in molecular microbiology at Curtin University in Western Australia.

Josh was interviewed about the impact of a postdoctoral fellowship in 2014.

“My mother told me that she dreaded the word ‘why’ when I was a child, as it was every second word that came out of my mouth,” Josh says.

As an undergraduate at Otago Josh took papers from across the sciences to help decide what area to pursue. “I did better in physics, maths, and chemistry than biology, but I found genetics and evolution most interesting, so in the following years I switched.

“At first I didn’t think I did so well in biology, and I worried that I had made a terrible decision. I was very relieved when Otago Genetics lecturers presented an incredibly refreshing and demystified view of genetic analysis from the perspective of the founding geneticists, microbiologists, and chemists. I pretty-much instantly decided this was what I wanted to do.”

Near the end of a postdoctoral fellowship at the University of Cambridge Josh was considering whether to return to New Zealand, or move to Australia.

“The Health Sciences Postdoctoral Fellowship allowed me to come back to New Zealand and develop many of the exciting discoveries made during my PhD, and gave me a chance to take on a more senior role.

“I chose Otago because I’d worked well with people in the Ronson laboratory and the Department of Microbiology and Immunology. Professor Ronson has always been very altruistic about students’ career development, so I felt I could trust his mentorship. He has gone out of his way to help me progress my career—even when it has led to me leaving his lab!

“The Fellowship at Otago was definitely a good decision. It gave me an opportunity to quickly get more research published, and put me in a better position to apply for grants, and subsequently jobs.”

“I simply like problem solving and understanding living organisms. Evolution has always fascinated me because of clear patterns in nature that emerge from it. Once you understand the simple rules of evolution, you can very easily make predictions and then design experiments to directly test it in nature.”

Read the extended interview with Josh 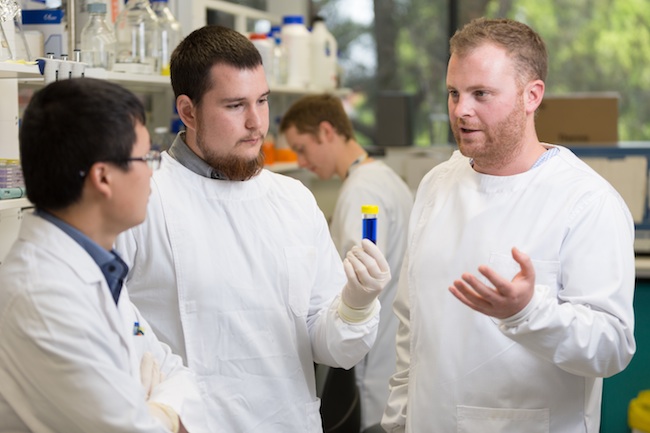 Josh and colleagues in the lab at Curtin University in Western Australia.

They’re small, but they can be deadly. And we’re still trying to understand how they work so we can protect ourselves. 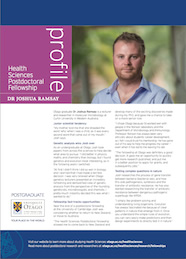