Lessons in politeness and performance 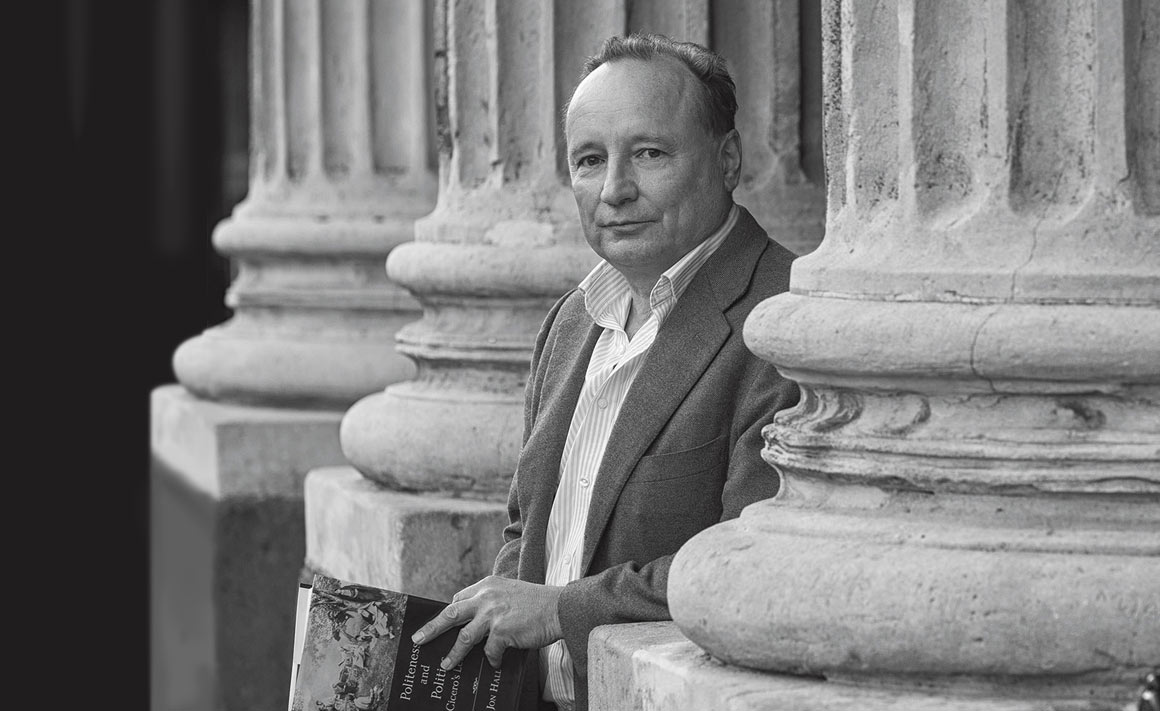 Professor Jon Hall’s study of the works of well-known Roman orator and politician Cicero show that we are not as far removed from Roman society as we might think.

The works of the Roman orator, lawyer, philosopher and politician Marcus Tullius Cicero have fuelled the research of classicists, historians, linguists and philosophers for centuries. Their analysis of Cicero’s texts informs much of what we know today of the workings of the late Roman Republic and the language they used. Professor Jon Hall’s research, however, takes a slightly different approach – focusing not so much on what Cicero says as how he says it.

Hall (Department of Classics) explores two less trodden aspects of Cicero’s works, aiming to dig beneath the surface of the texts to help us understand the social reality of the time. This, in turn, offers surprising insights into modern society.

Cicero’s use of politeness – the dextrous, almost ceremonial rituals of polite verbiage sprinkled throughout his letters to friends and allies – might seem an unlikely source of insight. But, as Hall explains, these social niceties – easily overlooked or even misconstrued – offer an important key to understanding.

“Some historians, for example,” Hall explains, “might dip into these letters for facts without understanding the social mores behind them. So when they find Cicero saying ‘My dear Antony, you are one of the dearest people in the world to me and I want you to know that I’m very concerned with your interests,’ they’ll perhaps conclude that Cicero and Marcus Antonius were good friends when, in fact, by reading all the letters you understand such interchanges as part of the social code of the day and that Cicero uses them because actually he and Antonius loathe each other, but have to find a way of negotiating necessary business.”

Hall demonstrates that such verbal “dances” reflect the way in which people used social codes of politeness to establish pecking orders and alliances, and negotiated power within Rome’s political and social systems.

In today’s society, we might not use the same codes, but we still perform many and varied social “dances”. Hall agrees that in this way we’re not as removed from Roman society as we might think.

His work suggests that polite language – either then or now – offers a vital clue to the underlying intent of the overall communication, exactly because the niceties they convey may mean something other than what they appear to mean.

Hall’s other principal area of research explores Cicero’s work in a more dynamic way. Fifty-eight of Cicero’s speeches remain, many of them defences of individuals accused of crimes, and Hall has researched them in terms of their performance, including orating them as they might have been delivered by the great man himself.

This work has thrown the spotlight on an aspect of Cicero’s speeches that has been somewhat overshadowed by pure textual analysis, and that is their implicit showmanship. Cicero was adept, it appears, at staging emotionally charged tableaux in order to argue his case in the Senate.

In his speech on behalf of Marcus Fonteius, for example, Cicero orchestrated a heart-wrenching family scene to demonstrate the family grief that would arise should Fonteius be found guilty – and force the jury to empathise. In defence of Sestius, Cicero shrewdly arranged for Sestius’s son – a much more sympathetic personage than his “thug” father – to appeal to senatorial heartstrings.

By performing the speeches aloud and re-enacting these vignettes, Hall proves not only Cicero’s command of language and the art of rhetoric, but also his use of oratory and theatricality to be persuasive. And here, again, comparisons can be made with modern-day society.

“People think that PR is a modern invention,” says Hall. “But the Romans and Greeks were very experienced manipulators of imagery, showmanship and political theatre to a point almost verging on propaganda. They were very aware of self-presentation, of how you created an image through the way you carried yourself and the words you used. They circulated coins, texts and other imagery and made speeches in which they would stress ‘buzzwords’, trying to create a sound bite people could latch on to.

“It’s fascinating to realise the Romans were doing 2,000 years ago effectively what we do today – it’s only the media that have changed.”

Hall’s research directly informs his teaching and has resulted in a DVD that enables students anywhere to experience Cicero’s oratory as performance. But a lesson all of us can take from Hall’s research is that Cicero provides an early but powerful example of political negotiation and legal advocacy – both important elements of a modern society.

“The Romans were playing for high stakes,” Hall reminds us. “They had a lot of administrative systems, but those systems could fall over very easily – and then they could end up with very violent times.”

Sound relevant for today’s times, anyone?