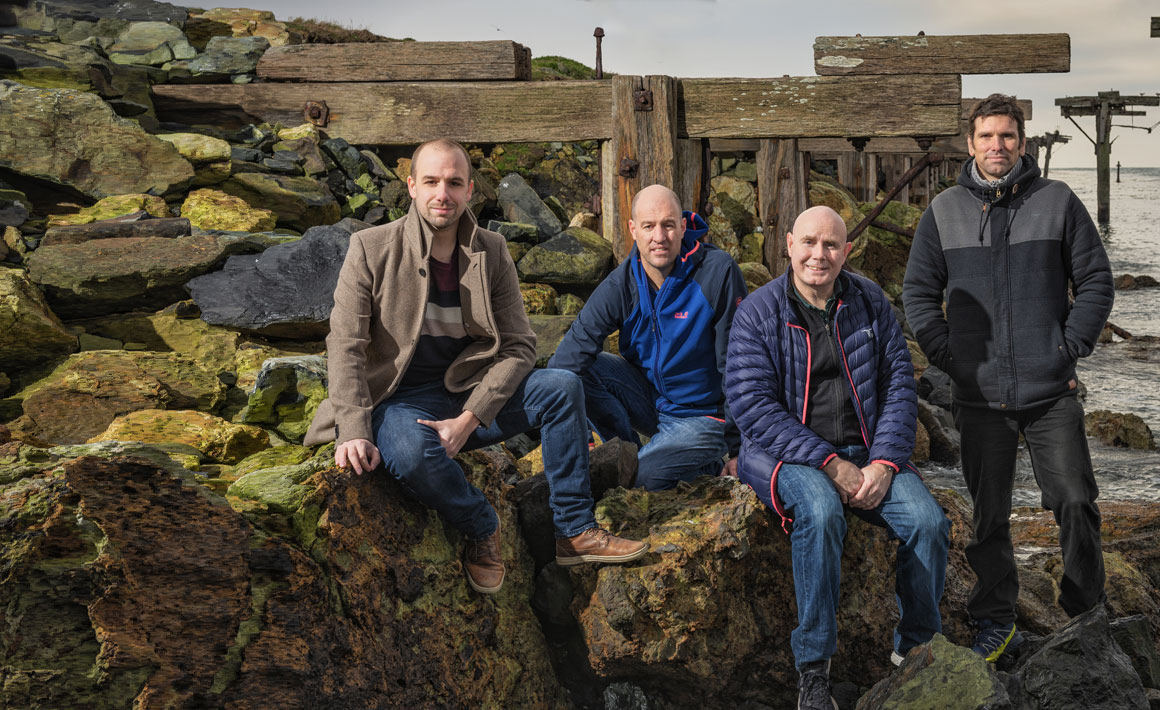 Dr Gert-Jan Jeunen, Associate Professor Chris Hepburn, Professor Neil Gemmell and Dr Michael Knapp: “We can filter DNA out of the water and analyse it – and that gives us some idea of what has been there.”

The waters of Aramoana and Doubtful Sound have been used to test the potential of environmental DNA as a quick and efficient monitoring tool.

Researchers from Marine Science and Anatomy have joined forces to demonstrate the potential of environmental DNA (eDNA) to detect species in the diverse marine environments of Doubtful Sound and Aramoana.

Dr Michael Knapp (Anatomy) says the underlying assumption of the project – carried out as part of the Sustainable Seas National Science Challenge – is that organisms leave traces of DNA behind as they swim through water.

“These will be small traces of DNA, but we now have technology so sensitive it can pick up those traces. We can filter DNA out of the water and analyse it – and that gives us some idea of what has been there,” he says.

“The advantages are that it’s a very speedy process. Normally environmental monitoring, especially in marine environments that are quite difficult to access, requires a large number of people and divers. You need quite complicated techniques and you need really good taxonomist who can look at any sort of organism and know what sort of species it is. It’s all very time consuming.”

eDNA can provide a reasonably quick snapshot, by comparison, allowing researchers to match the DNA found against what is in the database. Surface samples can be scooped out two litres at a time, but further down they use divers or even open cylinders which close and trap water samples when they get to a specific depth.

“DNA also doesn’t stay analysable for very long – probably a day or less – so what you see is what has been there just recently,” Knapp explains.

“It has disadvantages. The database isn’t particularly extensive yet, but it’s quite clear that with the increasing interest in environmental DNA worldwide the database could grow rapidly.”

In something of a proof-of-concept trial, postdoctoral fellow Dr Gert-Jan Jeunen put eDNA technology to the test in both Aramoana and Doubtful Sound – places where they knew what they would expect to find.

Aramoana, at the mouth of Otago Harbour, allowed them to test the resolution of the picture eDNA could provide, Jeunen explains.

“Aramoana is good because it has these very different habitats right next to each other. There’s a sandy beach and there’s a mole which is very rocky and then there are mudflats. They are well characterised, but very different communities living there.”

“The database isn’t particularly extensive yet, but it’s quite clear that with the increasing interest in environmental DNA worldwide the database could grow rapidly.”

The main surprises were things that weren’t in the database, for example, blue cod. It is an enormously important species in the area, but has yet to be included on the international database, something that can be rectified with funding.

Their Doubtful Sound research focused on understanding how DNA moves through the water column, says Knapp.

“If you have stratified water, like in the sounds, can you simply take a water sample from the surface and just infer what is there all the way through the water column or are there differences? Does DNA from the top sink down so it is all over the place?

“As it turns out it really isn’t. There is very clear layering in the water, based on Gert-Jan’s work.”

Knapp says the research has shown eDNA is quite specific and reasonably accurate, picking up species that may be hiding during a taxonomic survey. However, taxonomic surveying will pick up species not on the database, so at the moment a combination of both would provide the clearest overview.

In time the database will improve, meaning eDNA has the potential to save time and money, allowing more regular surveying with faster results.

Associate Professor Chris Hepburn (Marine Science), who is director of the aquaculture and fisheries programme and involved in the Te Tiaki Mahinga Kai project to guard customary food gathering areas, says eDNA provides a tool to gain additional data that is often missed by researchers in murky coastal seas.

“Monitoring changes in biodiversity in marine protected areas, identifying invasive species and providing more information for areas that are inaccessible – for example, beyond the range of research divers – are promising applications for this technology.”

Next:
DNA and earthquakes