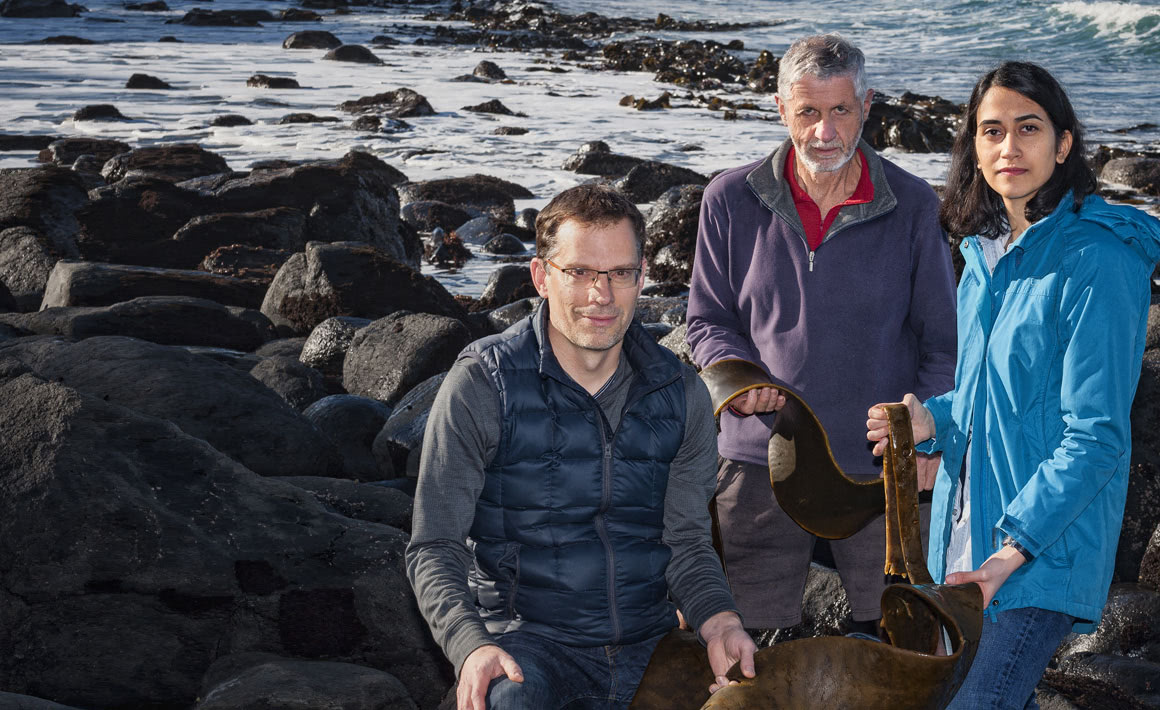 Professor Jon Waters, Emeritus Professor Dave Craw and PhD student Eli Parvizi: “When we saw what the Kaikoura earthquake could do, it opened a door for us.”

A “eureka” moment has seen Otago researchers use kelp DNA to find out more about a catastrophic event that occurred along the Dunedin coastline some 1,000 years ago.

In the aftermath of the 2016 Kaikoura earthquake, Professor Jon Waters (Zoology) and Emeritus Professor Dave Craw (Geology) observed the total destruction of kelp on an uplifted area of coastline.

“It was just such an astonishing and large-scale event, over 50 to 100 kilometres,” says Waters. “The kelp was left high and dry, and in several places it all died. For some species, there was a complete wipe-out. One of our questions was, What's the effect of that long term?”

Waters and Craw, part of a collaborative team of marine biologists, geologists and geneticists, then decided to look more closely at an uplifted stretch of coastline south of Dunedin on the Akatore fault, where there was evidence that a large earthquake had occurred around 1,000 years ago.

“When we saw what the Kaikoura earthquake could do, it opened a door for us,” says Waters. “It was one of those ‘eureka’ moments. The team had been working on the genetics and distribution of kelp DNA for the last 10 years, so we had a good fix on kelp all around the Southern Ocean. We had the tools we needed.”

By comparing the DNA of kelp found inside the uplifted zone to that on either side, they were able to see a genetic anomaly - a DNA signature of recolonisation that was distinct from the flanking populations.

“New Zealand is ideal for this kind of research because things are happening here all the time and are moving at a pace where it just doesn't in many other parts of the world.”

“What seems to have happened is “boom” the earthquake occurred, the shore came up, everything was wiped out and, probably within a few years, it came back. Now we're looking at Kaikoura and we think we'll probably see something similar happen there,” Waters says.

According to Craw, this discovery is useful for geologists because it helps distinguish between slow incremental uplift of coastlines, such as what is occurring in Scandinavia at the moment, and sudden catastrophic uplift events like in Kaikoura and Chile.

“If the uplift was slow, not catastrophic, the kelp would not have all died; it would have just kept recolonising as the land went up,” he says. “We now know that it is possible to see a genetic signal from 1,000 years ago. I would like to see how this could be applied elsewhere in the world and, particularly, I would like to see how far back in time a genetic signal like the Akatore one can be preserved before other more local effects start to make the signal more fuzzy.”

Waters believes this is the first time DNA testing has been used in such a way.

“You wouldn't have thought DNA was going to tell you anything useful whatsoever necessarily and to find that it can is quite a cool idea. It provides a new way to look into the past, even in terms of something as dramatic as an earthquake.

“New Zealand is ideal for this kind of research because things are happening here all the time and are moving at a pace where it just doesn't in many other parts of the world.”