Register your entry for the Festival

The University of Otago and the SGCNZ Sheilah Winn Shakespeare Festival

The University has sponsored this event since 2007. A number of the talented performers and participants in the Festival continue their education at the University of Otago, and we are equally proud of the talented alumni that have progressed through both organisations.

The University enjoys a mutually beneficial relationship with Shakespeare Globe Centre New Zealand (SGCNZ) through its energetic CEO Dawn Sanders. For example, a number of University staff from our English and Theatre programmes have served as performance assessors and workshop tutors during the Festival; and SGCNZ has provided the University community with a number of fascinating, internationally recognised speakers, from the Globe in London and other Shakespeare-related companies.

The SGCNZ National Shakespeare Schools Production (SGCNZ NSSP) was held in Dunedin in 2010, 2014, 2016 and 2018. Many of the Directors and Tutors engaged for SGCNZ NSSP have strong connections with the University of Otago.

The Festival is an annual event that involves more than half the secondary schools in the country. During the Regional Festival, students engage with Shakespeare's plays by performing 5-minute and 15-minute excerpts from them with schools in their area.

Schools from each region are then selected to go on to participate in the National Festival.

The Festival scope is wide as students act, direct, serve as crew, compose music, write essays; and create costumes, posters, static images and dvd covers for their performances. A large percent of students participating in the Festival - 73%, are aged between 16 and 18 years old, with the majority of performances - 68% in 2017, being student-directed.

Video about the Festival

Regional Festivals are held between March and April every year, in 24 centres throughout the country.

The National Festival, featuring selected representatives of the regional festivals, is held during Queen's birthday weekend in Wellington. 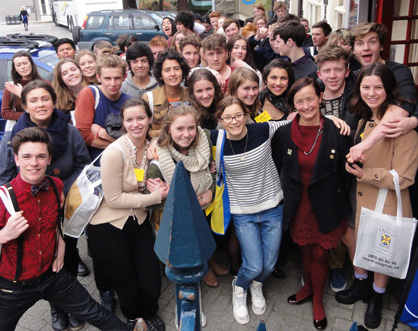 Shakespeare Globe Centre New Zealand was founded in 1991, and held its first Shakespeare Festivals in 1992.

Register for the University of Otago Sheilah Winn Shakespeare Festival

Register your entry for the Festival

Find out more about SGCNZ and Shakespeare's Globe