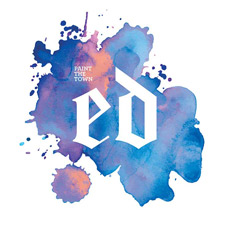 Otago staff and students are contributing to the city's "Paint The Town Ed" initiative, with the Shape of Sound show at Otago Museum.

University of Otago staff and students are joining many across Dunedin in “painting the town Ed” this Easter, as British singer and songwriter Ed Sheeran comes to the city to perform three concerts.

Members of the Department of Music have teamed up with staff and students from Chemistry and Physics, along with the New Zealand International Science Festival (NZISF) to create The Shape of Sound – a show linking science and music – at Otago Museum tomorrow.

The event will see Music’s Ian Chapman, singer Molly Devine and Dr John Egenes play Sheeran songs, which will then be “taken apart” and analysed.

Director of NZISF Dan Hendra says the show will provide explanations of what makes a good song.

“For example what is a melody, what is a rhythm, what is the difference between noise and music? Not only will you hear what makes this up, but it will be seen/explained so you understand it.”

Following the musical analysis, Chemistry’s Dave Warren and his team will run the second part of the event at the Department of Chemistry – creating experiments around sound, testing theories and doing more elaborate experiments.

Meanwhile Esther Haines and Bianca Sawyer of Physics will be involved in experiments with physics and light.

Mr Hendra says the NZISF often piggybacks on major city events, in order to host science-related ones – such as Science of Sport events held around All Blacks matches.

“We have officially invited Ed to watch (and partake!) in the event,” he says. “You never know, he might. Apparently he's a fan of science and math, hence his album names.”