Moving launch for The Anzac Violin 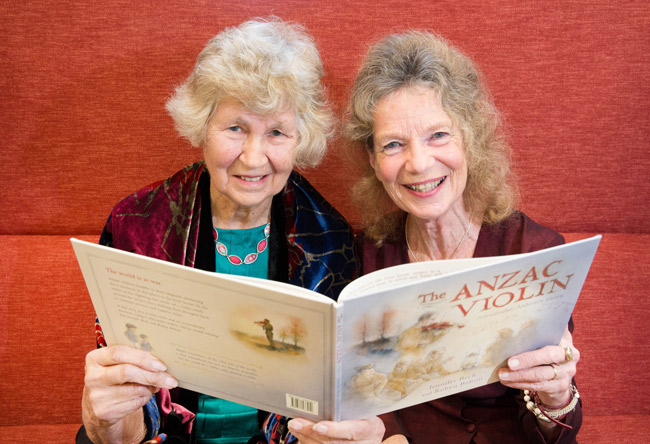 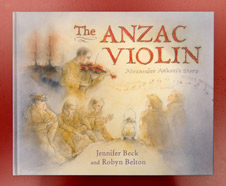 The cover of The Anzac Violin.

A beautiful picture book based on the First World War experiences at Gallipoli and the Somme of Dunedin’s Alexander Aitken (1895-1967) and his violin was launched at the Hocken last week.

The Anzac Violin was written and illustrated by the 2015 University of Otago College of Education/Creative New Zealand Children’s Writers in Residence Jennifer Beck and Robyn Belton.

The pair used the fellowship to work together on the book, Jennifer writing the words, Robyn completing the stunning paintings which illustrate it.

"... it felt such an honour to be able to give Alexander’s family their own copy of the book!"

Present at the launch were Aitken’s half-sister Joyce Aitken Kirk and her husband Melvell Kirk, both 97 years old, together with four generations of the Aitken family.

For both authors, who became incredibly fond of Aitken during the telling of his story, having members of his family at the launch was poignant.

“I am so proud to be able to launch our Anzac Violin in this, the final year of the World War One centenary commemorations,” Robyn says. “And it felt such an honour to be able to give Alexander’s family their own copy of the book!” 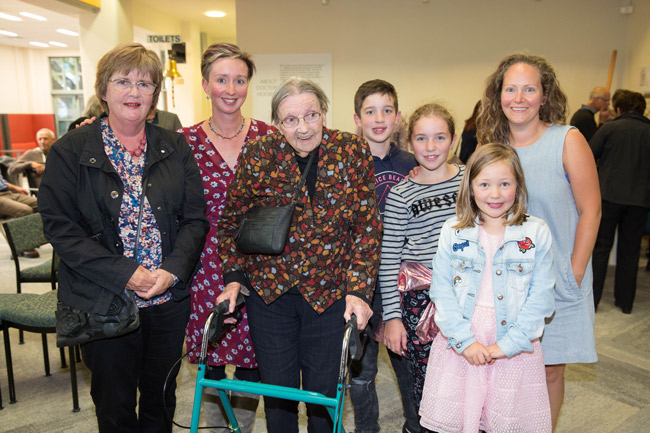 Alexander Aitken's half-sister Joyce Aitken Kirk and her family at the launch.

It also included a performance of The Last Post by Scholastic’s Book Rep Sarah Arnel, who offered to play just hours before the event.

“She then rushed home to get her St Kilda Brass band uniform, and gave a stunning and moving performance on her cornet. It truly was the perfect finale, and such a generous gesture,” Robyn says. “It really was a launch like no other.”

As well as being an accomplished musician, Aitken, who attended the University of Otago and was president of the OUSA, was also a gifted mathematician who went on to become a Professor of Mathematics at the University of Edinburgh.

"This is a very well researched, movingly narrated, and stunningly illustrated picture book whose publication towards the close of the centenary commemoration of World War One is timely."

He was given the violin by a friend who won it in a raffle on board the ship taking them to Gallipoli. The story of this violin, which accompanied him through the war, bringing music to him and his fellow soldiers forms the basis of Robyn and Jennifer’s book. The violin eventually followed Aitken home and is now kept on display at his former school Otago Boys’ High School.

“It's a great honour for the University to know that its generous fellowship in association with Creative New Zealand has provided the opportunity and time for Jennifer and Robyn to complete their project,” she says.

She calls the book a “future New Zealand classic” and says its launch highlights the value of this fellowship.

“Jennifer Beck's nuanced portrayal of Alexander reflects warmth and humour, and most significantly his attachment to the violin, a symbol of hope and a potent motif throughout the narrative. Robyn Belton's delicate water colour illustrations perfectly capture the period, create atmosphere and extend the storyline. This is a very well researched, movingly narrated, and stunningly illustrated picture book whose publication towards the close of the centenary commemoration of World War One is timely.” 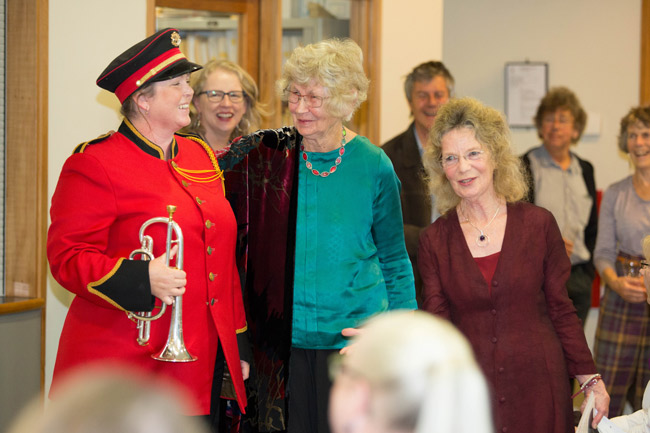 Scholastic’s Book Rep Sarah Arnel who raced home to get her cornet to play The Last Post during the launch.

For Robyn, a highlight of her time of the fellowship was knowing that Otago Music professor, Anthony Ritchie, was also working on his own project about Aitken.

“He was writing the oratorio Gallipoli to the Somme. We were working on our projects at the same time and we often shared our findings.

“The day I discovered a piece of music, in the Hocken, written by Alexander, Anthony called in and played it for me on my piano. What a treat! We talked about Humoresque, the soldiers’ favourite, and about the field telephone wire used when the violin strings broke.

“Anthony wondered what this would have sounded like and whether he might put it into the piece. His brilliant Gallipoli to the Somme is the most profoundly moving piece and I have continued to play it while making these paintings.”

"We have tried to give it our best shot, and to do justice to Alexander Aitken and other Otago soldiers who fought in World War One."

For Jennifer, who is normally based in Auckland, coming to Dunedin for this fellowship was a wonderful experience.

She says she really appreciated the support of colleagues at the College of Education, being able to research and write ‘on site’ while living in the Robert Lord Cottage and the fun of exploring Otago Peninsula with Robyn – “despite some hair-raising moments on corners in her car”.

While it has taken three years to complete the book, both Robyn and Jennifer say it has been worth it.

“We have done what we set out to do. It has taken time, but we are so proud of the result,” Jennifer says.

“We have tried to give it our best shot, and to do justice to Alexander Aitken and other Otago soldiers who fought in World War One. I find myself becoming quite emotional at times when I read this story of courage and comradeship and see the words paired with Robyn’s moving illustrations.”

“I think it took me almost as long as the First World War to finish this book. I was a long time ‘in the trenches’ but I’m so excited to bring Alexander’s story to a new generation of readers.”