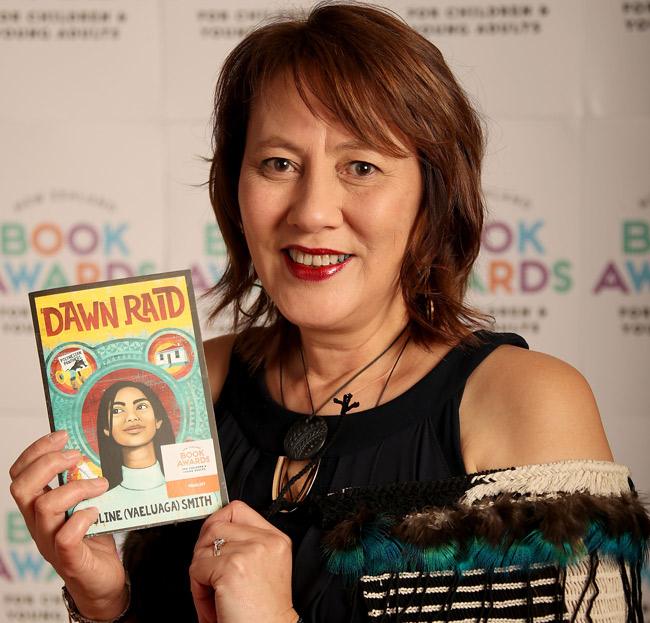 The University of Otago’s Pauline Smith is humbled to have won Best First Book at the 2018 New Zealand Book Awards for Children and Young Adults last Thursday for her debut novel Dawn Raid.

Mrs Smith, a Lecturer at the Southland Campus of the University’s College of Education, wrote Dawn Raid after becoming aware that many students in her Pacifica Studies classes had limited or zero knowledge of the history of dawn raids by police on Pasifika households throughout the country in the mid-1970s.

So, through the eyes of 13-year-old Sofia, Mrs Smith tells of the terror of the dawn raids and the work of the Polynesian Panthers to encourage immigrant families in New Zealand to stand up for their rights.

"It was a humbling experience to sit alongside acclaimed authors that I have admired for many years."

Her book was one of 33 finalists selected from 152 entries in the awards, and winning the award at Thursday evening’s ceremony at Te Papa in Wellington was an “absolute thrill”, she says.

“It was a humbling experience to sit alongside acclaimed authors that I have admired for many years.”

Dawn Raid is the 28th book in Scholastic New Zealand's ''My New Zealand Story'' series, which tell of significant events in New Zealand's history as seen through the eyes of fictitious child diarists.

Mrs Smith says she has long admired the way this series engaged young people with important New Zealand history, and believed the story of the dawn raids and the role of the Polynesian Panthers belonged in it.

Since the book’s release in March she has been delighted to discover it is already helping to educate New Zealand children about this important piece of Pacifica history.

“I have visited quite a few schools and talked to students who have been reading Dawn Raid,” she says. “I have been really impressed with the intelligent and thoughtful questions that the young people have been asking. I think Dawn Raid is helping to inform and educate which makes me very pleased.”

Mrs Smith says she has "quite a few ideas in mind" for future books and is looking forward to getting her teeth into a few and developing them soon.