Otago was one of the first universities in the world to support teaching and learning through dedicated higher education research. This year the Higher Education Development Centre (HEDC) celebrates its 40th anniversary. As the Otago Bulletin Board discovered, it is a Centre which has much to be proud of. 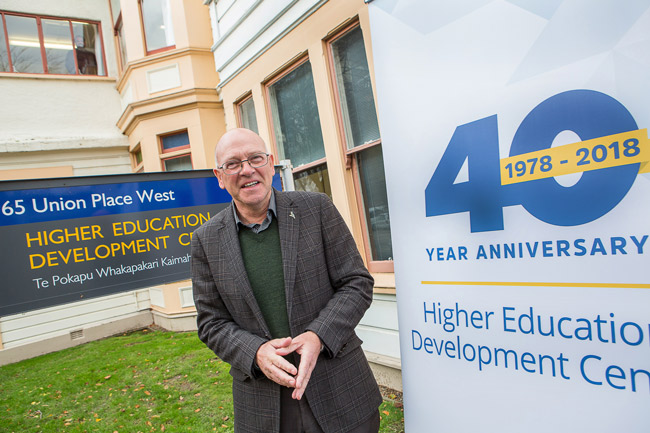 When the University of Otago opened its Higher Education Development Centre (HEDC) in 1978, the concept of having a department that provided its institution with an academic development service was new.

Forty years later, HEDC is one of the leading higher education research departments with an international reputation.

Head of Department Professor Tony Harland says HEDC has evolved over the years as technologies have developed and the University’s needs have changed.

“In terms of our higher education research we are now world leaders. In terms of supporting teaching, learning and academic development, the demand for our services is increasing each year and we plan to continue developing new initiatives to support staff,” Professor Harland says.

"Our role in enhancing the quality of teaching across the university is evidenced through the institution’s success in national teaching awards, as well as Academic Quality Agency and TEC indicators of university performance."

“Our role in enhancing the quality of teaching across the university is evidenced through the institution’s success in national teaching awards, as well as Academic Quality Agency and TEC indicators of university performance.”

The suggestion to set up a research centre to study higher education was made in 1971 by the University’s Lecturers' Association.

In 1973 an Audio Visual Learning Centre (AVLC) was formed and Terry Crooks, a lecturer in the Education Department carried out research and provided advice for academics on teaching and learning.

Professor Harland, who has been researching the Department’s history, says that throughout the 1980s and early 90s there was a strong emphasis on teaching aids and the use of educational technology, alongside research-led academic development to help teachers.

However, from the mid-90s, HEDC began a period of transformation.

“The first change was the introduction in 1996 of a formal course in tertiary teaching which has since grown into a suite of postgraduate qualifications and a strong Masters and PhD programme.

“The second change came in 1998 with the inclusion of undergraduate support and a new emphasis on student learning development.

“A few years later, with the expansion of the University’s postgraduate students, the department introduced dedicated programmes for this group.”

HEDC now has three locations on the Dunedin campus and staff in Invercargill, Christchurch and Wellington. The permanent staff is currently 10 Lecturers, four part-time Teaching Fellows and three professional support staff. It has a postgraduate student community of about 50, and works with between 5000 and 6000 staff and students each years.

“As might be expected, the educational technology side of HEDC has gone through some major revolutions, starting with visual aids and video production, then designing and building web applications, and latterly to data analytics and big data. Until last year HEDC also assisted the University and staff with teacher and course evaluations but this function now resides with the Quality Advancement Unit.”

"I’m really proud that the University has had a long-term commitment to enhancing teaching quality."

A more holistic vision for academic development also came into being in the early 2000s, Professor Harland says. Instead of focusing solely on teaching, the department developed a new model to support academics that included their research, teaching and service.

“In other words, it recognised that all academic tasks are closely linked and that often advice is needed across the complex spectrum of academic work. HEDC staff also have close collaborations with various professional staff groups across the institution and work with senior management to help the University achieve its goals.”

The 40th anniversary has been marked within the Department with a morning tea, and in November will be celebrated more widely when HEDC hosts the 'Celebrating Higher Education Symposium' in the St David Lecture Theatre Complex.

For Professor Harland the milestone is an opportunity to celebrate a “great department, which boasts staff who care passionately about higher education.”

It is also an opportunity to recognise the vision and contribution of the early pioneers who set up the department and the many who contributed over the years.

“I’m really proud that the University has had a long-term commitment to enhancing teaching quality.”