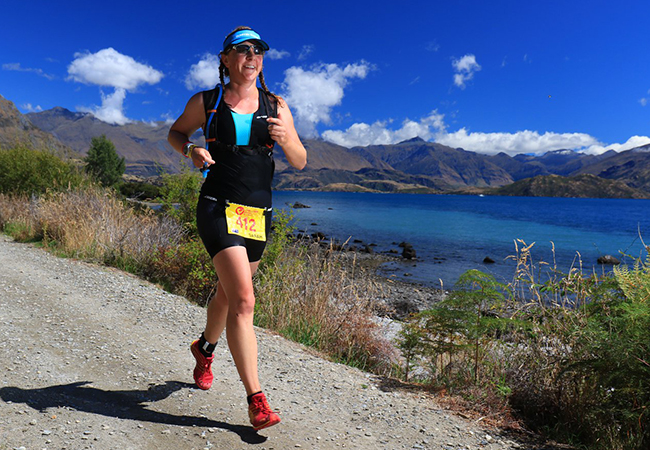 Prior to immigrating to New Zealand from Britain in 2009 Sarah had lectured law at the University of Plymouth and the University of Buckingham. She had also worked at the Office of Fair Trading in competition enforcement law and at the European Commission (EC) on their stagiaire programme.

She found not having a PhD a “career limiter”, and study at Otago in her specialist area – personal privacy in the age of digital media – was an appealing option. 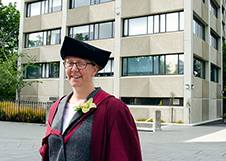 Sarah on her graduation day.

In addition to study, Sarah developed an interest in multisport and marathon running while at Otago, and has completed the Challenge Wanaka triathlon half distance event – which comprises a 1.9km swim, 90km bike and 21.1km run – every year since moving to Dunedin.

“It is a beautiful environment, a challenging course and a great way of escapism from other aspects of life! This year I finally beat my pre-child personal best and am down to 6hrs 1minute! I've raced pregnant and with tiny new born children!”

In addition to taking third place in this year’s Dunedin Marathon, she was accepted into The Cupcake Cartel triathlon team which motivated her to enter Ironman New Zealand in Taupo next March.

Sarah “juggles” training around solo parenting for eight-and-a-half weeks at a time while her partner works in West Africa. This often involves running on a treadmill (cheered on by her children as they have dinner) or chasing them around mountain bike tracks in Wakari.

She credits the support from many staff and the Law faculty as integral to the successful completion of her thesis.

" I have had the best supervisor in Professor Paul Roth, and my secondary supervisors Associate Professors Barry Allan and Selene Mize...."

“Paul has encouraged me through not only the good, but also during the tough times along the PhD journey. Although we are a rather remote university, the support provided through the Law Library services is second to none. I would like to pay special thanks to Kate Thompson, and also to Carolyn Upton, who sadly is no longer with us. Carolyn encouraged me to keep trying to use new and wonderful technologies available to manage my research.”

Aside from completing her thesis, an academic highlight for the year came in October when Sarah presented a paper at the Amsterdam Privacy Conference.

“Writing is hard work; however, the PhD process has helped me develop my confidence to continue writing and researching and after successfully presenting in Amsterdam I consider it relevant to keep sharing the research and findings in my area of law.”

Excerpts from Sarah’s thesis abstract: Privacy and leaving your past behind 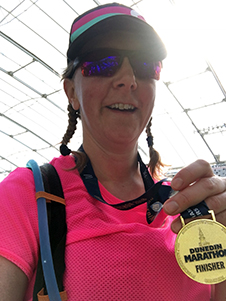 Sarah after finishing the 2018 Dunedin Marathon.

Several decades ago leaving one’s past behind used to be a relatively easy phenomenon. An individual could move town, country or even continent to build a new life. In the digital age in which we now live, it is increasingly challenging to achieve separation from one’s past. Using the right to a private life is one way in which it is possible to leave one’s past behind. The term ‘right to be forgotten’ has garnered much public attention since the Google Spain case before the Court of Justice for the European Union in 2014. The result that a person should be able to request from Google that the search results list displayed could be modified (after using an individual’s name as a search term) has alarmed those who believe in free speech and particularly those who believe that the internet is the last bastion of truly free speech.

This thesis sets out to show that the concept of the right to be forgotten is not a new concept per se, but is rather one which has gained traction with the development of how individuals use the internet.