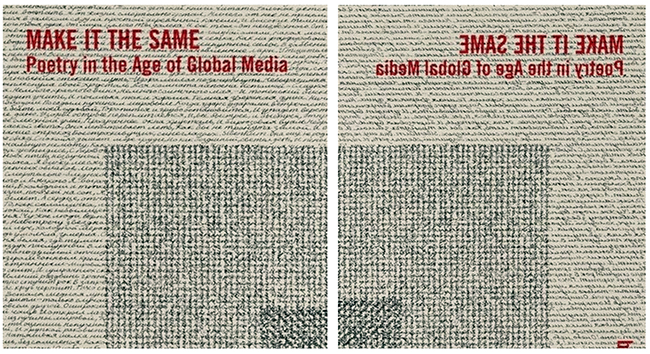 A new book by English programme Associate Professor Jacob Edmond examines the turn toward repetition in poetry, using the explosion of copying to offer a deeply inventive account of modern and contemporary literature.

In Make It the Same: Poetry in the Age of Global Media, published by Columbia University Press and due out in late July, Edmond discusses how a diverse range or writers and artists (and people in general) – from dub poets in the Caribbean to digital parodists in China, samizdat wordsmiths in Russia to Twitter-trolling provocateurs in the United States – respond to a world of proliferating copies. 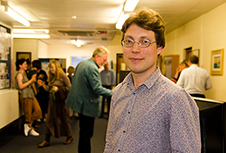 The book also discusses a range of cultural ideas unique to the digital age, including the troubling consequences of the “attention economy”, which is produced and sustained by social media. Edmond says he wanted to explore how this attention economy can drive increasingly “outrageous and extreme acts on and off-line – regardless of their ethics.”

Our world is full of copies. I wrote Make It the Same because I wanted to explore the consequences for art and culture of this world of proliferating copies.

We can now easily make copies of vast quantities of texts, images, and videos—something utterly unimaginable until very recently in human history. We also live in a world in which those copies travel across vast distances at the click of a button. This copying across languages and cultures goes to the very heart of what we call globalization.

We sometimes, quite rightly, see this incessant copying as a threat, particularly when it seems to impact negatively on local languages, cultures, and traditions, and when it seems to promote a culture of clickbait and shares, in which value is measured only by the number of copies.

In Make It the Same, I wanted to explore how writers and artists respond to copying's negative effects. But I also wanted to address the creative uses that they make of copying, which is, after all, a fundamental trait of human culture.

At the broadest level, Make It the Same is about how writers and artists (and people in general) respond to a world of proliferating copies.

Now, artists and writers might—and some do—respond by seeking to affirm the originality of their art. But what Make It the Same shows is that much of the most interesting and influential contemporary writing and art in fact works through copying, not against it.

Specifically, it shows how poetry—an art form associated with the singular, inimitable utterance—is increasingly made from other texts through sampling, appropriation, translation, remediation, performance, and other forms of repetition. We might think that such creative uses of copying are a product of the Internet age.

But Make It the Same shows that poets made similar use of earlier media technologies, such as the tape recorder, typewriter, and photocopier. So the Internet age is not so much the beginning as the continuation of a trend that stretches back at least to the 1950s, probably earlier. For example, Jamaican DJs invented many of our modern music sampling techniques using analogue acetate discs in the early 1960s. The poet Kamau Brathwaite, working in Jamaica at the same time, did a very similar thing for poetry, though he made use instead of the newly available medium of reel-to-reel tape.

As this example shows, when we start to take the art of copying seriously, we also see the history of art, literature, and music differently. In the past, writers and artists from small countries like Jamaica or New Zealand have often been seen as playing catchup to the cultural centres of London or New York. But seen through the art of copying, the history of recent art and literature looks quite different. In fact, it’s often writers and artists who sit outside these so-called centres who make the most powerful use of copying, in part because they are the ones who are most often accused of merely copying trends from somewhere else.

What can poetry offer us in terms of exploring complex contemporary issues?

While it is an academic book, Make It the Same also addresses some very topical concerns. For instance, one chapter looks at some of the troubling consequences of the “attention economy” produced by social media. I explore how this attention economy can drive more and more outrageous and extreme acts on - and offline regardless of their ethics. I hardly need to point out how topical this issue is in the aftermath of the massacre in Christchurch.

Another issue that my book covers that might be of interest to a general or arts audience is the role of copying in our contemporary world.

In all fields of life, we tend to celebrate innovation and deride copying. My book argues, however, that copying is an underrated and important shaper of our social and technological world and is, arguably, more important to culture and society at large than making it new. While I write about the importance of copying primarily in relation to contemporary art and literature, I think this lesson has much broader implications for how we think about art, culture, science, technology, and society.

Equally importantly, my book addresses the copying involved in cultural globalization. We cannot escape this globalization, which means we find the same brands and the same music and films appearing again and again around the world. But the artists and writer that I discuss in my book turn this threat to local cultures into an opportunity. They find ways to play with and remix the cultural copying that is globalization.

Because it addresses such a broad range of examples, from Taipei to Moscow, Barbados to London, Make It the Same also showcases the cultural diversity of contemporary poetry and so gets us away from narrow, Eurocentric, sometimes stuffy views of what poetry is or might be. Exciting and influential poetic work can emerge from almost anywhere in this global cultural scene.

Finally, my book discusses sometimes strange and often beautiful examples of poetic word art that makes wonderful use of new media technologies of the era from tape recording and carbon copy in the 1960s and 1970s to today's digital technologies.

I hope reading this book makes people think about our everyday acts of copying, whether they are viewing a webpage (and so copying it temporarily at least onto their computer) or sharing a social media post or news article. We live a substantial portion of our lives through acts of copying. Make It the Same explores some of the positive and negative consequences of that copying and so will hopefully make the reader more aware of the consequences of their own acts of copying and more alive to beauty and dangers of the copy.

You should read this book if you are interested in contemporary writing and art. But even if don’t think poetry or avant-garde word art is your cup of tea, you’ll still find plenty here to interest you, whether you are concerned about the impact of globalization and social media, or about other contemporary social issues such as rising nationalisms, the refugee crisis, and the politics of race.