Photo call for your 1960s images 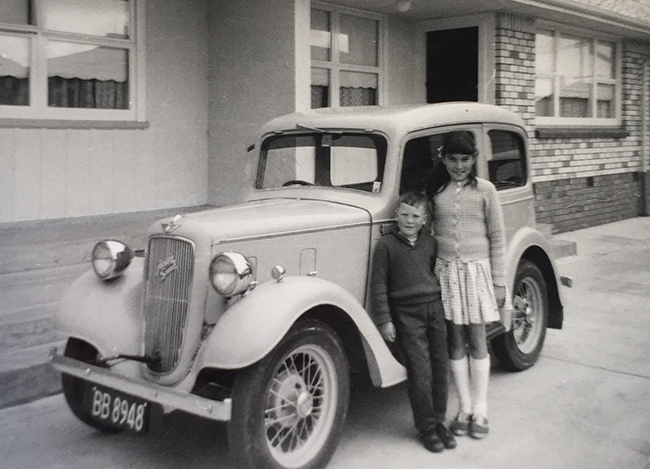 Ian Chapman, sister Shirley, and his mother's Austin Seven, circa 1965.

The personality book will feature Dr Chapman’s first-hand recollections of growing up in a decade he describes as “extraordinary”.

Born in 1960, he will describe his impressions of a decade that featured great cultural change which inspired many artists and musicians.

The book will be more than a personal memoir however, and contributors will include a bevy of invited guest writers, including some very well-known celebrities drawn from a wide range of creative fields.

“I also have a bunch of New Zealand’s most renowned poets contributing so it’s going to be a delightfully interdisciplinary mashup that uses their recollections to paint a picture of life in the 60s, uncovering the formative influences on their creativity that have fed into their subsequent work”.
A primary feature of the book will be photos of a type often overlooked in historical publications, with Dr Chapman wanting images from family albums, and “stuff that has never seen the light of day.”

“This is the approach I took with the Dunedin Sound book I did a few years back, and even further back my 1970s book, Glory days: from gumboots to platforms (Harper Collins). It’s pretty exciting because you never know what will arrive in your inbox!”

“I’d like to put out a call out to Otago staff to delve into their family albums and send me pics of their everyday family life in the 1960s. Also pictures of any particularly notable events too, of course, if any surface, but especially those that show aspects of everyday life. Beyond evoking nostalgia, I think it’s important to document and discuss how life was for most people in that amazing era.”

Images (scanned at 300dpi please) can be sent to: ian.chapman@otago.ac.nz

Please note, due to size limitations not all submissions will be published, and the final selection will be made in conjunction with the publisher.