New evidence shows pre-schoolers are some of the most intuitive city planners, yet their voices are largely disregarded in city design.

A two-year project by School of Geography researchers has investigated pre-schoolers’ experiences in, understanding of, and visions for their city. 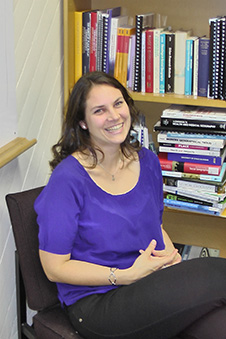 “We don’t even know how they engage with or what their visions are for the city they live in; we don’t ask them; they are often disregarded as too young to provide good answers or even being able to talk about their city experiences as they are seen as being unable to think in a city wide scale.”

According to the United Nations Convention on the Right of the Child and the UNICEF child-friendly city initiative, children of any age or ability have the right to access urban resources and a right to meaningful participation in the creation, transformation and development of their urban environments, be it through formal planning and development projects or their everyday practices, she says.

“We need to develop ways for integrating their views, experiences and suggestions.

“Our research shows young children between 2 ½ -5 years old care for the cities they life in, its people and living and non-living things.

“They think holistically about what a city needs to function well, be safe, healthy and fun. How they are treated by the city influences their life chances and their well-being as young children, which in turn affects their wellbeing later in life.”

The children engaged in a variety of exercises including mapping their ideal city using picture tiles, group discussions with researchers, and neighbourhood walks to demonstrate what they liked and didn’t like about their local area.

The mapping exercise revealed the children to be caring, considerate planners, not just of their own needs, but also of other city dwellers.

Children also viewed a safe city as important, with 56 per cent placing police cars on their map to symbolise being kept safe from burglars, “naughty” and drunken people, and speeding drivers.

The pre-schoolers expected cities to have at least the basic amenities of a child-friendly city necessary to meet the everyday needs of city dwellers, says Dr Ergler.

“These include health services, services and facilities that stimulate mind and body as well as those that provide natural environments and gathering places.

“However, the young children not only created child-friendly, but ‘care-full’ cities that ensure their liveability for humans of all ages and non-humans.”

Study co-author Professor Claire Freeman says while on neighbourhood walks, the children warned researchers about toadstools, prickly bushes, and glass on footpaths, which they were concerned could injure dogs.

“They are also very aware of dangers and adult’s fears for their wellbeing and that cities can be dangerous places. In this they reflect adult fears rather than seeing these places as dangerous from their own perspectives.”

Dr Ergler explains the walks were important to assess pre-schoolers’ connections to their neighbourhood, a previously unstudied topic.

“A reason for this omission is the commonly held view that pre-school children lack competency to reflect on wider lived environments beyond playgrounds, kindergartens, and other more confined settings that dominate early childhood research,” Dr Ergler says.

In contrast, she says, walking with the children showed researchers they were meaningful makers of place and had deep connections to their local environments.

“Thus, communities, planners and urban policy makers need to ensure young children can participate and make the most of their local environment in a safe manner.”