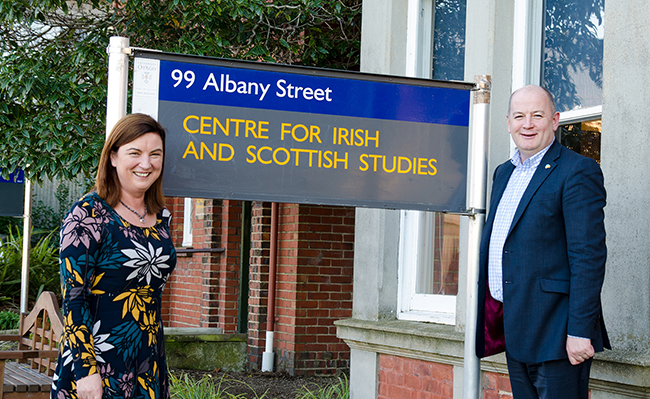 Professor Tiernan and the Ambassador of Ireland to New Zealand, His Excellency Peter Ryan.

In addition to containing many ‘firsts’, new research from the University of Otago’s Centre for Irish and Scottish Studies provides comprehensive insights into the identity of Irish people in Aotearoa New Zealand.

The report was commissioned by the recently established Embassy of Ireland, New Zealand, and funded by Department of Foreign Affairs of Ireland.

The Ambassador of Ireland to New Zealand, His Excellency Peter Ryan, says the report’s findings will help guide and influence the work of the Embassy of Ireland as it “deepens and broadens its reach across New Zealand.

“We thought it very timely, following on the visit of President Higgins in 2017 and the setting-up of our respective Embassies in Wellington and Dublin in 2018, to look in greater detail than ever before at our community.

“The findings of this historic report reflect the extraordinary reach and diversity of our community and we are already working on a number of initiatives to enhance our work under the headings of Community, Commerce and Culture”.

Professor Tiernan says while Aotearoa has strong historical ties with Ireland, its recent relationship is dynamic, and based on reciprocal trade and migration opportunities.

“The relationship is burgeoning, and it is vital we build better understandings of what’s driving this, while factoring in historical connections forged by earlier migrations. Our two countries already have a developing trade network so, beyond providing a more accurate demographic picture, the results may also have an impact on business connections.”

Tiernan says the report’s findings, which are highly accessible and feature interactive maps and graphs, will help shape the political and cultural and commercial activities of the Embassy’s Team Ireland. They may also be a useful reference for members of the broader Friends of Ireland groups nationwide.

Based on analysis of census data, Statistics New Zealand reports and online survey responses from 1,536 respondents, the report shows Irish immigrants moving to New Zealand and staying long term has steadily increased over the last four census returns, from 2001.

Where Irish immigrants live largely depends on economic factors; the number of skilled Irish immigrants moving to areas such as the Canterbury region since the 2011 earthquakes, for instance, has more than doubled since 2006 (to 2,553).

Irish immigrants, and especially Irish women, are paid considerably more on an annual basis than the national average. The age range of the Irish ethnic group is predominantly young; 38 per cent of all those of Irish ethnicity are aged between 25 and 44 years.

The survey also provides the most detailed information gathered to date on New Zealanders of Irish heritage and affiliation, gathering details of 2,932 people who listed links to all Ireland’s 32 counties.

“Due to the high number of Irish among the early New Zealand settlers, it is estimated that approximately one in every six people in New Zealand has Irish heritage, but these figures have yet to be confirmed by statistics. A question on whether respondents would like to share their stories about Irish links received an overwhelming response, prompting the Embassy of Ireland to plan a project to share these stories broadly,” Tiernan says.

The report is also the first to seek input from 23 Irish organisations – broadly defined as any group, society or association based on or around an Irish interest – on their geographical distribution, membership, interest and goals. Promoting Ireland and supporting people emerged as missions common to most.

It also has a foreword by Michael D. Higgins, President of Ireland, and has what is believed to be the first translation of one of Ireland’s most important documents – the Proclamation published in Easter 1916 – into te reo Māori.

The full report can be viewed at: https://www.friendsofireland.co.nz/survey

Listen to Professor Tiernan discussing the report on RNZ here.

Dunedin, 24 January: the report’s launch will be held at Toitū, Otago Settlers Museum, and the Ambassador of Ireland to New Zealand, His Excellency Peter Ryan, will attend.

Wellington, 29 January: report launched at Parliament; Professor Tiernan will give a keynote address to mark the publication of the report as part of the Embassy’s inaugural Summer School titled ‘Small Nations – Big Ideas’.