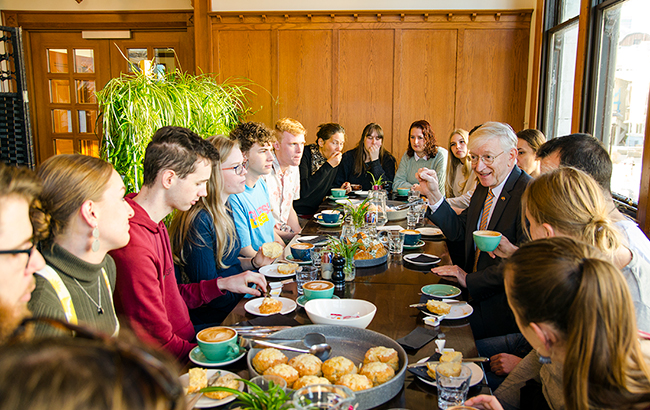 During a visit to the University of Otago’s Dunedin campus on 18 May, German Ambassador His Excellency Stefan Krawielicki told students language skills are essential for gaining good jobs in Europe, and worldwide.

At a morning tea for Languages and Cultures students he joked about his obvious bias for German but said because the language was the most spoken in Europe it had become a lingua franca for business and diplomatic relations in the European Union. 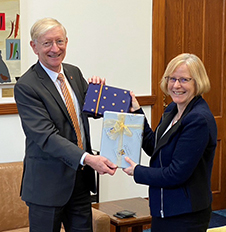 Giving examples from his 30-plus year career as a diplomat, and various current trade negotiations, Mr Krawielicki enjoined students to develop language skills because they would give them a strong “competitive advantage” in the domestic and international job markets.

In response to a student’s question about the best way into diplomatic work Mr Krawielicki urged the undergraduates to challenge themselves by experiencing different cultures and working overseas. 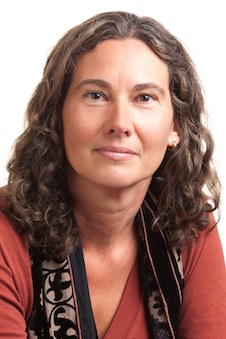 “The Ambassador certainly pressed the benefit of language learning for the international job market. Our students have the advantage of knowing English, but to be competitive in an international context being able to communicate in other languages is an important asset.”

The Ambassador presented a lunchtime seminar (image 1, below) entitled Change of perspective: sharing experiences from 30 years of diplomatic life before touring the Dunedin campus and meeting with senior University staff (image 2, below) to discuss Germany’s relationship with New Zealand and education opportunities.

About: Mr Krawielicki specialised in law at Tübingen. After practising law in Paris, he joined the Foreign Office in Bonn as attaché and legal advisor. In 1990, he joined Lisbon’s German Embassy, and was appointed head of the Economic Section of the German Embassy in Riyadh. In 2000, he was appointed to Berlin’s Foreign Economic Affair department, later deputy head of the Cultural and Education Department, and head of Plenipotentiary for Franco-German Cultural Relations. In 2005, he became head of the Paris embassy’s Legal and Consular Section, later returning to Berlin’s Foreign Office as head of Culture and Communication, and German Schools Abroad, Youth and Sports. 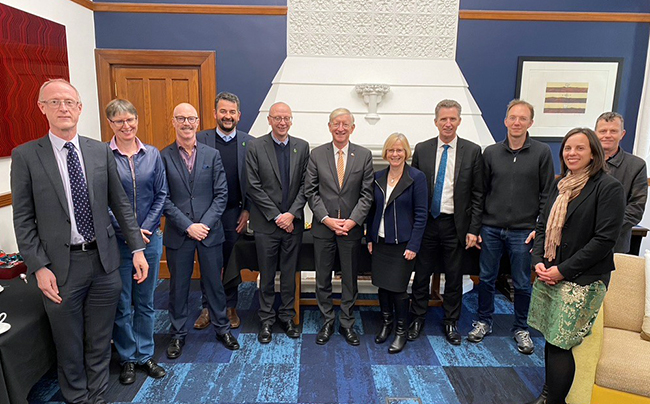