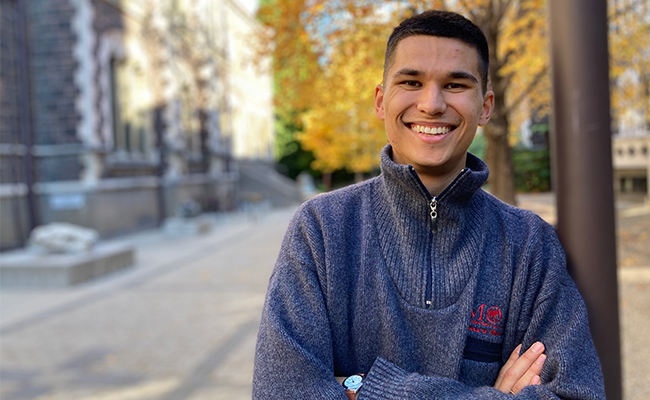 Noah Kemp (23) is aware that the full extent of his achievements could take some time to come into effect.

Noah (Te Atiawa, Ngapuhi, Tuwharetoa) graduated with a Bachelor of Arts and a Bachelor of Law earlier this month, a double degree that has been anchored in support from whānau and Te Roopū Whai Pūtake, the University’s Māori Law Students Association.

“You stop looking at the law simply as the way of life. Instead you realised this is how some people live their life to the exclusion of others. There was an anger in me in the classroom. Why had I not been taught that before then?”

As Noah’s story unfolded, a number of people have helped shape the direction he has taken. None moreso than his own father Tony, who's life choices were driven by the vision that his children, and generations after, wouldn’t suffer the same trauma he had.

“My dad talks about breaking the cycle. His goal with my sister and I was to put us in a spot to get a better upbringing than he got. He says it takes two generations to break the cycle,” he says.

He openly admits he didn’t quite know what his University journey would look like when he first started on campus. A keen hip hop fan, he eventually settled on Māori Studies and Politics to complement his law degree.

Despite a difficult start to life away from home, Kemp eventually found the epiphany he needed to thrive at law school. A fourth year law paper known as Law and Indigenous Peoples, created by the country’s first Māori professor of law, Jacinta Ruru.

He learned about how the law historically functioned to establish colonies and nations throughout the world and how this function can be traced as far back as the Church in the 15th century.

It led to him asking himself a question – how did all of that end up affecting his whānau for generations to come.

“You stop looking at the law simply as the way of life. Instead you realised this is how some people live their life to the exclusion of others.

“There was an anger in me in the classroom. Why had I not been taught that before then?”

There were timeless reminders of his time at University about the importance of generational thinking. At a recent pre-graduation ceremony, one of the graduands spoke that stoked another fire into the importance of the work she would do.

“She said the potential we have as young Māori lawyers to actually change the system and coming from within that system could so great, but we may not see the fruits of that action for a long time.

“It comes back to what my dad was saying around breaking the cycle and seeing the true fruits of what they’ve done.”

With his graduation now complete, Kemp is embarking on a new journey in the law field in the litigation field. He has gone through similar journeys of the unknown before, and knows this is another important step towards changing things for the better for generations to come.

“The thing that I’ve realised is this thing I’m doing is bigger than me and I’m seeing it as the next step in my whanau’s journey.”