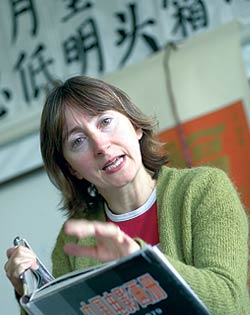 For Paola Voci, moving around a lot during lectures is a very important aspect of the way she teaches.

Dr Voci is an Associate Professor and Head of Department in the Department of Languages and Cultures, and also the President of NZASIA (the New Zealand Association of Asian Studies). She teaches Chinese language and culture, as well as Asian Studies. Dr Voci completed her undergraduate degree in Venice, and went on to study film theory and history at the Beijing Film Academy. She gained her PhD from Indiana University in the United States. Before coming here, she spent time at a couple of American universities, "where the classes were a lot bigger than what I have now.

"I like to have very interactive lectures when I'm teaching, so I move among the students while I'm talking and encourage participation. I also use a lot of visual aids - which is not surprising, I guess, since my area of interest is visual culture - and I make sure there is plenty of interactive time in class. This kind of approach is especially important for teaching language."

Dr Voci’s research focuses on visual culture and in particular, film and videomaking practices in contemporary China. She has worked extensively on Chinese independent documentary and has expanded her research to light videos– i.e., movies with minimal production costs, limited distribution, and often a lack of concern about profit.

"Film-making in China is changing and moving outside its traditional institutional boundaries. Cinema circulates beyond movie theatres or TV sets; the moving image is now increasingly found on smaller screens - such as computer monitors or smart phone displays.

"And thanks to portable and affordable digital technology, cinema today is also made up of a myriad of amateur videos that contribute creative and often dissonant perspectives on what China is" she says.

“I’m interested in the type of dissent that these forms of visual culture can produce and how they can contribute to create a more open society."