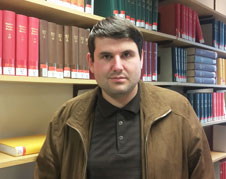 Geoffrey Miller combined studies of politics and language at the University of Otago, graduating in 2007 with a first class Honours degree in Politics, as well as a Diploma in Language and Culture, endorsed in German.

During his degree, Geoffrey undertook a six-week language course in Freiburg, Germany, on a scholarship from the German Academic Exchange Service. He took up this opportunity at the end of his second year.

After graduation, Geoffrey completed further study, graduating in 2011 with an M.A. in TESOL (Teaching English to Speakers of Other Languages) from the Victoria University of Wellington.

Geoffrey also lived in Germany, where he was employed as a lecturer in the Department of English and Linguistics at the Johannes Gutenberg University of Mainz for nearly a decade. As part of this, he taught language and translation courses, but also cultural studies courses about the English-speaking world.

"I created a number of original courses – one on the end of the British Empire, for example, and another looking at the news media. Probably the most popular course I taught was the one about New Zealand, where we looked at everything from the role of the Treaty of Waitangi to the Rugby World Cup and Flight of the Conchords", Geoffrey explains.

Building on the German skills he developed at Otago, Geoffrey has also become a qualified translator for German to English. For this he undertook rigorous exams in Germany, passing the prestigious State Exam (staatliche Prüfung) in 2015. Geoffrey also holds the equivalent qualification from the UK, the Diploma in Translation, awarded by the Chartered Institute of Linguists in London.

Geoffrey now works as a freelance translator for clients around the world, specialising in the politics, business and marketing fields.

"Translating has been a passion of mine ever since I studied German at Otago", Geoffrey says. "I'm now able to work on translations from anywhere in the world as a freelance translator, which is amazing".

Geoffrey has continued to expand his portfolio of languages and speaks fluent Spanish and Swedish, in addition to German and English. He is currently studying Arabic.

"Politically, Arabic is a hugely important language and the Middle East is only growing in relevance – so it makes sense to learn Arabic", Geoffrey remarks.

On the politics side, Geoffrey continues to maintain his interest in New Zealand politics that began during his Otago degree, when he wrote his Honours thesis about the Act Party. He even came back to New Zealand during the 2014 election campaign, when he worked as a tutor for the POLS102 New Zealand Politics paper taught by Dr. Bryce Edwards.

"I'm building a career which connects my interests in politics and languages", Geoffrey says - an exciting career path which began at Otago.