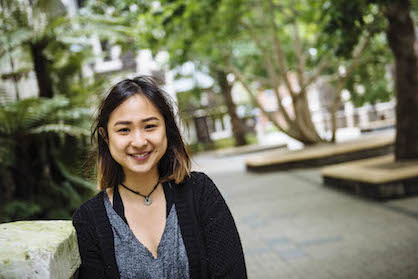 Nicole Chuah grew up in Auckland but chose Otago for her undergraduate studies.

"People say your university years are supposed to be the best ones ever, so it had to be somewhere I knew wouldn’t disappoint.

"Otago appealed for its ideal mix of academic and social activities and Dunedin has all the right kinds of student town vibes."

Nicole tried out a variety of subjects in her first year. "I didn’t know what I wanted to do, but after my first year I knew what I didn’t. So I made the decision to choose a new course and it’s been good."

Changing to a BA in philosophy, politics and economics (PPE) has worked for Nicole.

"PPE has three different disciplines, which I like for the variety, and they mesh together well. It doesn't quite get the kind of recognition in New Zealand as it does internationally - and it should, because it engages you to think of society from multiple levels and analytical frameworks.

"PPE gives you the substantial depth in a cohesive breadth of disciplines that prepares you for jobs in a range of fields, such as politics, business and journalism. I like it for this reason - it's a flexible degree you can mould to suit your interests."

This year Nicole will be doing a semester on exchange in California. "To be able to pay domestic tuition fees while studying somewhere else in the world is great.

"It’ll be different living in a country as opposed to travelling there as a tourist. And I’ll get to live and study there. How amazing is that?"

After a summer spent backpacking in South-East Asia, Nicole is ready for the future, hopefully with fewer mosquitoes.

Find out more about the PPE programme