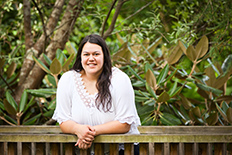 Leigh Clutterbuck Young likes the way she was able to keep her degree courses flexible so she could concentrate on what she enjoyed the most.

She started studying geography as she had always liked it at school. She also did first-year law, looking at the possibility of moving on to environmental law.

After her first year she decided not to pursue law, instead adding environmental management as a minor to her geography BA.

“Don’t get stuck into just one thing,” she says. “Talk to people about different subjects and pick papers you like doing or you might be interested in and go from there. You can always change later.”

She chose to go to Otago because it was close enough to home in Gore that she could keep in touch with old friends and family, but far enough away for her to find her independence.

Leigh (Tainui, Ngāti Haua) was awarded a Māori and Pacific Island Entrance Scholarship, and says the Māori Centre was a great help in her first year, particularly with extra tutorials and senior student mentoring.

“Geography at university is very different from school in that there are so many subjects we had never touched on at school. I particularly liked the paper on research methods in human geography.”

Unlike many geography students, Leigh chose to do a BA rather than a BSc so she could focus more on human rather than physical geography.

On Leigh’s own social side, she played netball in her first year, and volunteers with the Rock Solid youth leadership programme in South Dunedin.

She hopes to go on to a Master of Planning, and then travel overseas to get involved with development work.