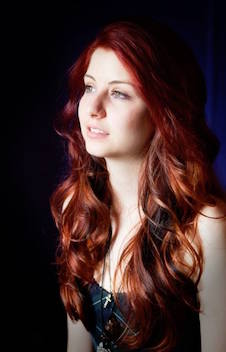 Molly Devine has always loved music and Otago’s focus on contemporary music made it a perfect fit.

“Having a contemporary department really excited me, particularly contemporary rock - I was a bit of a rock diva back then. Once I got into the department I learnt there was expertise in all sorts of contemporary music; there is such a diverse range of lecturers and people to support you”

Molly started her music degree nearly six years ago alongside a degree in both Psychology and English, which she says paired well.

“Because music is so practical it’s nice to have something a bit more academic, I was able to take song ideas from what I was learning in psychology. English and music worked really well together – I even took an English paper called poetry in music that had lecturers from the Music Department.”

The benefits of postgraduate study drew her to focus solely on music. She completed an honours degree in contemporary music before moving onto a master’s degree in vocal performance.

“It was so practical and applicable to what I wanted to do, and the ability to record in a studio was a huge benefit – it’s really hard to do outside of university.

“During my Honours I recorded an album and as part of my Master I was able to record a live performance at Albany Studio with an eight-piece band. It was great to use such an amazing facility for something different; normally it’s just used for recording so it was cool to get an audience in there – if a bit squishy.”

Even though it can be really hard to break into the music industry the range of skills Molly has learnt during her time at the University of Otago has set her up well to succeed.

“It really helped me to be independent– I can write a song, I can sing a song and I can record it. It’s really hard to find the money to pay someone else to do things – so its great having all the skills I need.”

Having just been on tour and released the first of a three part EP, life shows no sign of slowing down now that Molly has finished studying.

“I’m still writing, performing and recording as well as teaching a bit of singing. There’s also a new tour in the spring and music videos to make.”