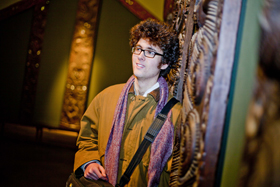 The University of Otago was a logical choice for Griffin Leonard, a PhD student in Peace and Conflict Studies.

Griffin grew up in Dunedin and university was even closer to home than his high school. Otago has a great reputation, offered the Politics and Philosophy courses he was interested in and many of his friends were also studying here.
Griffin sees his tertiary studies as a great opportunity for community involvement through the university’s clubs and societies.

Although he is geographically distanced from his Te Arawa iwi, his Māori heritage is an important connection for him and his parents. He shares their strong philosophies and values and became actively involved in social justice issues at high school, particularly through youth leadership forums.

When he was in the sixth form he organised a concert at the University of Otago for Amnesty International, to raise awareness of child soldiers in conflicts around the world. He was invited to attend the organisation’s annual meeting in Auckland the following year.

In his first year at Otago, Griffin was selected to attend an aspiring leaders’ forum in Wellington.

He says it was “an amazing experience” being surrounded by like-minded individuals and meeting national politicians who put party politics aside to focus on young people and share their views on leadership.

Griffin says one of his core reasons for being at Otago is to keep his study options open, but he sees his future in diplomacy and conflict resolution and has faith his studies will lead to a constructive job in this competitive field.

“We’re very lucky to have the National Centre for Peace and Conflict Studies at Otago and I feel fortunate to be able to do postgraduate study here,” he says.