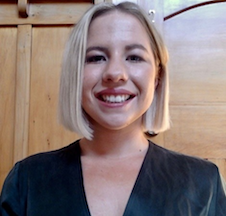 It was after watching a documentary on modern slavery that Macaela Joyes first decided to study law and within her first week of working she was attending a forum on modern slavery and what New Zealand can do.

Alongside her law degree Macaela studied politics and French to give her “a better understanding of the machinery of government and greater global awareness”.

“My favourite part of studying at Otago was how passionate my lecturers were about their subject and how understanding they were.

“I had lecturers who really went out of their way to engage with their students. They encouraged us to pursue areas we were particularly interested in by allowing us to adapt assignment topics to a particular focus.

The benefits of studying at Otago go far beyond academic Macaela says.

“Because the majority of students come from outside of Dunedin to study, Otago provides a really unique experience. As cliché as it may be, the people I met and experiences I had living in places like a 10 girl flat really cannot be traded for anything.

“It really helped me adjust to working life since I had already experienced moving to a totally foreign environment and having to find my own way and build relationships with new people.”

Macaela accepted a role as a legal researcher in the employment services team at the Ministry of Business Innovation and Employment during her final year, so she completed her study via distance with a number of trips between Wellington and Otago.

“I was very lucky that Professor Hayward (Head of Department of Politics) was so supportive of me and helped me to find a way that I could take the role while still completing my tertiary study in time to graduate with the rest of my cohort.”

One of the opportunities Macaela took advantage of was the HUMS301 internship paper, which she was able to do as a summer paper while working at MBIE.

“My internship had several different elements but the overarching theme was assisting with the implementation of the new government’s manifesto commitments. I already worked in a legal role at MBIE but this allowed me to see an entirely different side to government work.

“It was a really perfect paper to finish off my politics study because I was able to see themes and theories I had studied since my first year in action. Reflecting on my work through the field notes gave me a much greater understanding of my work so the two complimented really well.

“I would really encourage more students to think about completing HUMS301. A lot of students already perform internships over their summers and HUMS301 enables that to be counted towards your degree. For people who are not already completing an internship it provides a really great opportunity to get some experience.”