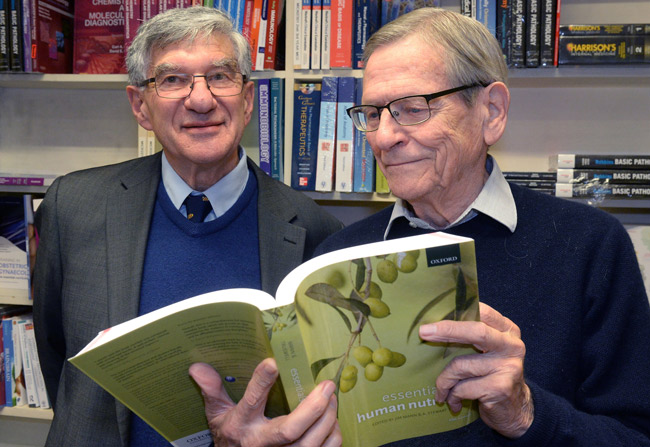 Authors and co-editors Professors Jim Mann (left) of Otago and Stewart Truswell of the University of Sydney at the launch of the Essentials of Human Nutrition, fifth edition at University Book Shop last year. The book has now been named highly commended in the Medicine category of the 2018 BMA Medical Book Awards. Photo: Otago Daily Times.

A textbook co-authored by Otago Professor of Human Nutrition Jim Mann, has been named one of the best in the world by the British Medical Association (BMA).

Essentials of Human Nutrition, fifth Edition was Highly Commended in the Medicine category of the 2018 BMA Medical Book Awards earlier this month.

Professor Mann, who is also the Director of the Edgar Diabetes and Obesity Research says that for him the recognition shows they have “at long last” succeeded in getting the message out that while nutrition is important for growth and development, it is also critically important in the treatment and prevention of the modern diseases of society – such as diabetes.

"It’s what I’ve spent my whole life trying to get across."

“It’s what I’ve spent my whole life trying to get across.”

Professor Mann and his colleague from the University of Sydney Professor Stuart Truswell released the first edition of the book 20 years ago, selling about 2000 copies. The fourth edition, released in 2012, sold about 7000, while sales continue to increase for this latest edition, released last year.

“It has really surpassed our expectations. We tried to write in format suitable for students in the early stages of their nutrition career, plus also health professionals who want to know about nutrition – doctors, nurses, pharmacists. The University Book Shop reports that it is frequently bought by people off the street – intelligent lay people.”

Professor Mann was invited to attend the prize giving in London this month, but was unable to attend due to other commitments.