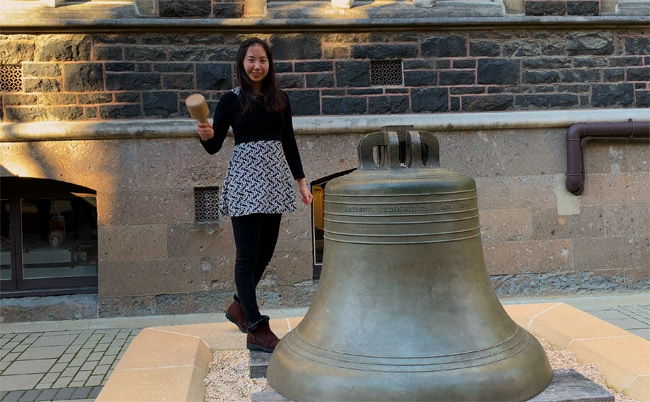 Human Nutrition doctoral candidate Claudia Leong prepares to ring the bell after submitting her thesis. See the video in the story.

The University of Otago has created a new tradition – inviting doctoral students to ring the University bell when they submit the hard copy of their PhD.

The tradition began in March when the historic bell was first brought back to the University and set in its new home in the quadrangle between the Geology building and the Clocktower building.

“It is a real, visible and audible mark of the end of a long academic journey for our PhD candidates – at three years, the time between admission and a formal examination is the longest for any of our degrees!

“Having the bell located in the historic quadrangle also provides a beautiful setting for people to gather to mark the occasion, and a lovely backdrop for photos.”

Claudia Leong is one doctoral candidate who recently submitted the soft copy of her PhD in Human Nutrition. We caught up with her when she rang the bell in in front of her friends and colleagues.

Professor Blaikie says that the inspiration for the new tradition is slightly unclear, but was the result of many discussions.

“When it was known that the first University bell had been rediscovered and was going to be gifted back to the University, many ideas for where it should be located were discussed,” he says. “This was also at the time that the St David II building was being refurbished, which is now where PhD candidates schedule an appointment with Student Experience staff to make sure that everything is in order for them to be able to submit their thesis.

“Bringing the change in this submission process together with discussions about the bell naturally led to ideas about a reward for successful submission being allowed to ring the bell (as well as being given the traditional chocolate fish from the Graduate Research School). The rest is history.”

The history of the bell is long and fascinating.

Made in Edinburgh, Scotland and shipped to Dunedin in 1863, it was first situated in the Post Office building in Princes Street which was the home of the University from 1871 to 1877. After being lost for a number of years the bell was returned to the Dunedin campus in March.

Staff member Glenn Wadsworth made a recycled rimu mallet with which to ring the bell, and donated it to the University.

But how to get the best tone? Professor Blaikie has the answer.

“With it currently being mounted on the ground, the best place to strike it is about half-way up, as this is the point at which the main tone is excited.

“If we were to hang the bell from its top mounting point then striking at the base would be more effective, but this may make the bell too loud for those working nearby!”

We're not sure if it would be loud enough for Ms Leong though.