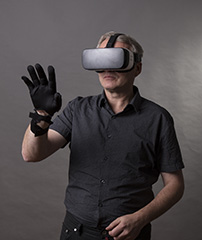 The University of Otago’s augmented reality research is challenging the brains of stroke patients to work out what makes reality a reality.

Augmented reality is where the view of a physical, real-world environment is augmented or supplemented by overlaid computer-generated visuals. Experienced through for instance a head-mounted display, it places images of both the physical world and virtual objects in the user's field of view. The surrounding real world of the user then becomes interactive and digitally manipulatable.

It is leading edge technology already being embraced by the global electronic games industry, but the University of Otago Business School’s Information Science Department is leading the way in looking at real-world commercial applications that will likely have significant impact on society.

Professor Holger Regenbrecht is pioneering ways to apply the innovations for human health and wellbeing, and has several ground-breaking projects underway. One initiative is trialing augmented reflection technology to treat unilateral impairments like strokes.

The technology involves visual manipulations of the normal and impaired hands of stroke patients, to trick the brain into perceiving the impaired function as the experience of normal limb movement. The aim of this changing perception is to encouraging neurons to reconnect in the brain, making movement possible.

Professor Regenbrecht said it’s not a quick fix intervention, but stroke patients have shown positive, incremental progress in their ability to use their impaired hand. “This work is at the fundamental stage and we need to know more about what is happening in the brain that allows our technology to manipulate perception and movement, but it is showing great promise.”

“The patients involved are pleased with their personal progress, but it’s also exciting to know what a team of information scientists, neuroscientists and health practitioners and researchers can achieve with augmented reality technology."

"It proves what the technology is capable of, but there are a lot more ways computer-mediated realities like this can potentially be used to enhance movement and manage pain."