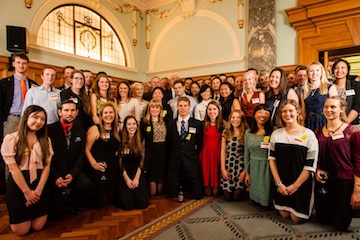 Three of our Chinese language students and one of our Japanese language students were awarded this year's Prime Minster's Scholarship for Asia. This scholarship aims to strengthen engagement between New Zealand and key Asian trading partners, as well as promote cross-cultural understanding. Samantha Steel, Alba Barrera, Eloise Callister and Caitlin Warwood received the award in Wellington at the Parliament's Grand Hall in Wellington on Monday 19 May.

More than 200 guests attended an event hosted by Prime Minister John Key, who encouraged recipients to get “first-hand experience” of the fastest growing part of the world. “Some of you will be heading to Asia for six weeks, and others for a few years, you will open up a lot of opportunities and create lifetime friendships.”

For more information about the Prime Minister’s Scholarships for Asia: http://enz.govt.nz/how-we-work/scholarships/pmsa

Sam has been studying Chinese at Otago since 2011 after returning from an AFS exchange to the city of Langfang in Hebei province. On completion of her BA in Chinese and Asian Studies this year she will start her honours year in July by spending a semester at Tsinghua University in Beijing and hopes to write her dissertation on popular Chinese fiction.

Caitlin began studying Japanese at Otago in 2013 as part of her BA in Japanese and BComm in International Business and Management. In Semester 2, 2014, She will be heading to Hirosaki University in the city of Hirosaki, Aomori prefecture to further her language and cultural knowledge. Upon returning in February, she plans to continue her studies and complete both degrees.

Caitlin says, “I hope to foster close relations between both Dunedin and Hirosaki during the course of my exchange, encouraging more students to visit and study at Otago. This is an incredibly exciting opportunity and I hope to take full advantage of my time in Japan.” 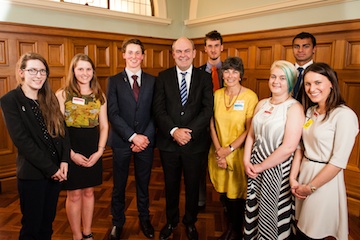 Alba Barrera sent us her own report about this event and some photos that we are happy to share!

' On Monday the 19th of May 2014 we were invited to parliament in Wellington. At parliament the Rt Hon John key and Hon Minister Steven Joyce congratulated us for winning the Prime ministers scholarship for Asia. We were among the second round of successful students ever to be awarded this prestigious scholarship. The scholarship is awarded to students who plan on going to Asia to partake in study for which the scholarship helps fund. Some of NZ's largest trading partners are located in Asia and the relationship between NZ and Asia is only growing stronger and becoming more significant for New Zealand's future.

Having been awarded the scholarship, we will have the opportunity to travel to our country of choice whether it be Korea, China, Thailand, Singapore or Japan just to name a few and do our part representing the future faces of New Zealand and the University of Otago.

As language students at the University of Otago we understand the benefits and endless amount of opportunities at our door step. Through a global perspective, learning another language at secondary or tertiary level is so important not only for business but also culturally. By living in a country other than your own the skills that can be learnt are invaluable and stay with you for the rest of your life.