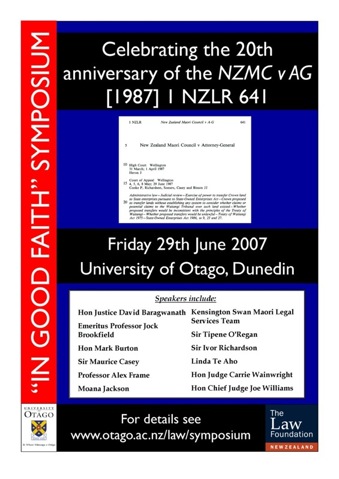 On Friday 29th June 2007, the University of Otago Faculty of Law and New Zealand Law Foundation hosted a national one-daysymposium in recognition of the 20th anniversary of the Court of Appeal’s landmark decision interpreting the principles of the Treaty of Waitangi: New Zealand Maori Council v Attorney-General [1987] 1 NZLR 641. It was, as the then President of the Court of Appeal, the late Sir Robin Cooke, acknowledged “perhaps as important for the future of our country as any that has come before a New Zealand Court.” The case was seminal in recognising a new approach, and was the Court of Appeal’s first articulation of the phrase “the principles of the Treaty of Waitangi”.

More than 160 people from throughout the country came to Dunedin to celebrate this case and consider its impact on law and society. There were judges, MPs (including the Speaker of the House), academics, practitioners, hapu representatives from throughout the country; and representatives from government departments and independent think tanks. We thank you for taking the time and effort to join us in Dunedin in mid-winter and contribute towards what was a successful and stimulating day. Our distinguished speakers included: Hon Justice David Baragwanath; Emeritus Professor Jock Brookfield; Hon Mark Burton; Sir Maurice Casey; Professor Alex Frame; Moana Jackson; Kensington Swan Maori Legal Services Team; Sir Tipene O’Regan; Sir Ivor Richardson; Linda Te Aho; Hon Judge Carrie Wainwright; Hon Chief Judge Joe Williams.

The day was opened by Edward Ellison, on behalf of Kai Tahu, and Professor Mark Henaghan, the Dean of the Faculty of Law. Mr Jim Nicholls, Deputy Chairperson of the New Zealand Maori Council; Paul James, Director of Office of Treaty Settlements; Virginia Hardy, team leader of the Treaty of Waitangi and International Law team at Crown Law; and Nicola Wheen and Jacinta Ruru, senior lectures at Otago’s Law Faculty, led the sessions acting as chairs. The day was closed with a short thank you presentation by Michael Stevens and Jacinta Ruru. Darryn Russell, the Maori Advisor to the Vice-Chancellor at the University of Otago, provided a few last words and a karakia for our safe-journeys home. 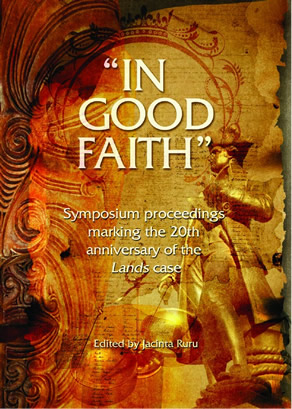 A permanent record of the day’s proceedings is now available. The ‘IN GOOD FAITH’ SYMPOSIUM PROCEEDINGS MARKING THE 20TH ANNIVERSARY OF THE LANDS CASE book has been edited by Jacinta Ruru and co-published by the New Zealand Law Foundation and Otago’s Faculty of Law. A complimentary copy has been sent to all Symposium attendees.

‘IN GOOD FAITH’ is available for purchase at-cost price: $33.75 (incl GST and postage within NZ only) International Postage will incur an extra cost.

To order a copy please contact Valmai Bilsborough-York, Faculty of Law, University of Otago, at: law.symposium@otago.ac.nz