The Cancer Society Tissue Bank hosted the Australasian Biospecimen Network Association Conference in Christchurch. This is the first time the ABNA meeting has been held in New Zealand.

We said farewell our international students who did their research projects with us over the last few months.

Julia Kleemann and Raffaela Bung from Germany worked on the role of fat cells in breast cancer. Fredrik Nilsson and Robert Malmsborg from Sweden investigated the role of vitamin C in cancer, and Guenther Bonifert from Austria did a short project on horseradish peroxidase.

Summer Students begin at the MCRG

We would like to congratulate Professor Bridget Robinson for being awarded the New Zealand Society of Oncology's Translational Research Award at the annual meeting of the NZSO in Tauranga on 21-23 October 2014.

The Award of $5000 is made by the Society to recognise an outstanding contribution to the field of translational cancer research. 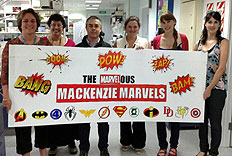 The Relay For Life celebrates cancer survivors and caregivers; remembers loved ones lost to cancer; and fights back by raising awareness and funds to support the work of the Cancer Society and cancer research.

We called ourselves the Mackenzie Marvels this year, and allowed our inner superheroes to emerge as we rose to the challenge of circling around a 400 metre track through the night passing the team baton (Thor’s Hammer) to each other.

There was a significant increase in the number of teams participating compared to last year which made the event much more festive and exciting. During our evening crusade against cancer we were attacked twice by the team of pirates, with She-Hulk and Wonder Woman coming to the rescue the second time.

The time and effort put in by our team was superb, with enthusiasm through the early hours and numerous blisters proving everyone was doing their part. All in all, we survived the night, met many interesting people and had a great time. 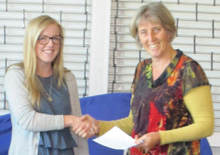 Congratulations to our Summer Student Hannah Palmer who has won the Best Overall Project Prize for the UOC Summer Internships 2013/14.

Hannah has been investigating over the last 10 weeks how a protein in fatty tissue can make breast tumour cells more invasive, leading to increased metastasis and, ultimately, more cancer deaths.

The study shows that proteins secreted by fatty tissue promote migration of breast cancer cells, meaning that obesity or excess fatty tissue not only increases incidence of cancer occurring but is also associated with a worse prognosis in those already suffering with cancer.