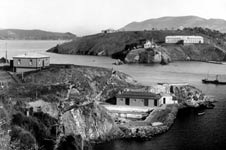 The site of the New Zealand Marine Studies Centre at Portobello is an historic one.  A Fish Hatchery and Marine Investigation Station was established in 1904, the first in Australasia. The Hatchery’s main role was to help establish European fish species such as lobster, edible crab, turbot and herring in New Zealand waters. None of the introduced species survived their release into our coastal waters.  However, research conducted over the last hundred years at Portobello has made an important contribution to our understanding of the southern New Zealand marine environment.

The University of Otago purchased the site in 1951 and constructed a research aquarium and teaching laboratory on the site of the old Hatchery building. A larger research laboratory was built in 1987.  The New Zealand Marine Studies Centre was established in 1990 and their current building was opened in 1996. 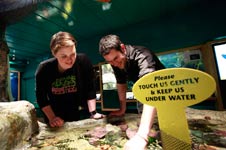 The Portobello Aquarium was New Zealand's first public marine aquarium.  Modelled after the one at Plymouth's Marine Biological Association, it was considered "state of the art" at the time it was built.  It was upgraded in 1987 and in 1996.  Displays focused on Southern New Zealand marine life.  At first only open at weekends and holidays, the Aquarium went on to become a major local tourist attraction, open to the public 7 days a week.

Sadly, due to the old building being classified as a potential risk following the Christchurch earthquakes in 2011, the Aquarium closed to the public in 2012.  Tanks and animals have been moved to the newer buildings on the Portobello site to support teaching and research activities, and New Zealand Marine Studies Centre remains open for pre-booked educational programmes and tours. 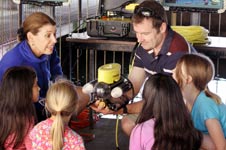 The Centre is the public face of Marine Science and a window on marine research at the University of Otago.  Since its inception thousands of people of all ages have visited the Centre and participated in education programmes, presentations and events.

Schools from around Southern New Zealand participate in our education programmes which vary from 1.5 hours to several days in duration. 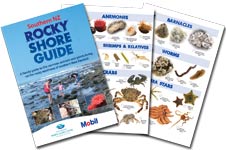 The NZ Marine Studies Centre has produced many educational resources - from games and teacher guides to a whole series of shore guides and supporting materials.

The resources are free for you to use for educational purposes. 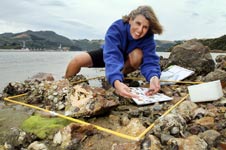 The NZ Marine Studies Centre encourages everyone to participate in long term monitoring of their marine environment.

Mm2 is a citizen science project developed in 2013 for this purpose.  Anyone can take part – individuals, families, schools and community groups.

It is an easy way for anyone to survey the plants and animals living on their local seashore.

Resources have been developed to help you carry out these surveys.  Watch videos, download instructions and free resources.  If you discover something unusual or anything you cannot identify, you can use our blog to upload photos and ask questions which will be answered by scientists.

Southern Seas: Discovering Marine Life at 46° South is a book exploring Southern marine life and telling the story of the Portobello Marine Laboratory and the New Zealand Marine Studies Centre.

New Zealand boasts wave-lashed coasts and ocean beaches, sheltered inlets and the grandeur of Fiordland. Its marine life is equally varied. Best known are the large seabirds and marine mammals - albatrosses, fur seals and sea lions – icons of southern ecotourism. As top predators, they depend on the underlying productivity of the region’s marine food web.

At the Portobello Marine Laboratory on the Otago Harbour scientists study the life, behaviour and biology of marine creatures and the environment they live in. Through the New Zealand Marine Studies Centre the public learn about them. This colourful and accessible book explores the environment and the story of both institutions.

The authors are all associated with the Department of Marine Science of the University of Otago.