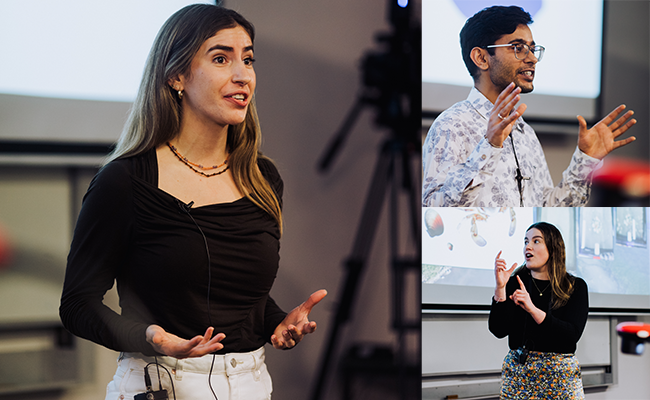 Fenton has submitted a video of her presentation which can be viewed on the University of Auckland website from Thursday 25 August until Sunday 4 September.

Members of the public are invited to vote for People’s Choice Award.

Nouri, who is completing her PhD through the Department of Pathology and Molecular Medicine at Otago’s Wellington Campus, says winning her section and getting the opportunity to represent Otago internationally was “really exciting”.

She travelled from Wellington to Dunedin to compete in Otago’s grand final.

“I definitely wasn’t expecting to win because the calibre was so high and I kind of had, like, psyched myself out with nerves. It was a real surprise.”

Her research is in helping to develop a new blood cancer treatment called CAR T-cell therapy. This novel treatment utilises the body's own immune cells to eradicate cancer, by reprogramming them to recognise and then kill cancerous cells, in a similar way to how they usually kill pathogens. 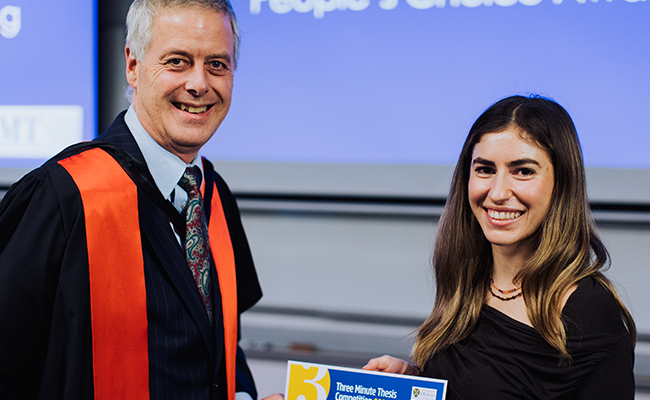 Presentations are a regular event for postgraduate students, and over the last five or so years of her study Nouri’s confidence in presenting has increased.

“I really enjoy public speaking and I really enjoy writing, so I think Three Minute Thesis is a really cool combination of the two. “

Nouri is approaching the end stages of her PhD which features three years of laboratory work and a phase of writing up the thesis.

“It’s been a really fun project I’ve loved it I’m going to miss it.”

She plans on moving to Melbourne once she’s finished her PhD to do post-doctoral work, carrying on doing research in the same field for the same type of therapy, but likely looking at alternative ways it can be applied or improved upon. 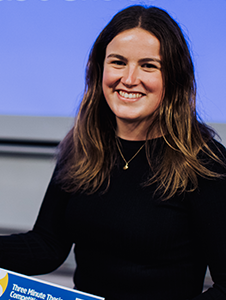 The Master of Science in Marine Science student, based on Dunedin’s campus, says she is “typically nervous” when public speaking.

Her research is on tuaki/cockle beds, how their decline is linked to human impacts and what communities can do to help restore them.

“The competition was a good experience; it was really good for me to practice at refining quite a stylised piece and communicating it well to a wider audience,” Fenton says.

Things went well on the night, and it was “awesome getting a bit of energy off of the crowd and not being too nervous”.

She heard about the competition via an email and watched a few videos of previous competitors, before deciding to have a go herself.

Fenton hopes to hand her thesis in in December before taking a six-month-long break. She will accept the bursary to write up two papers from her thesis and might then head overseas for a bit.

“I will come back and hopefully keep studying somewhere in NZ, I’m keen to start up a PhD towards the end of next year.”

She would like to keep working within the shellfish and coastal restoration area: “That’s what I love”. 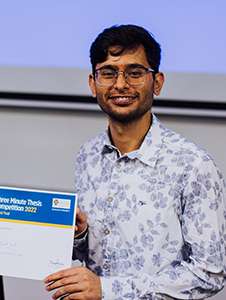 PhD candidate Nautiyal is based in the Department of Tourism, on the Dunedin campus.

His presentation on his research was titled ‘Why (and should) I pay for ancient practice?’, which explores product development in yoga tourism, specifically in the context of the yoga destination Rishikesh in India.

“I was so focused on delivering my presentation that when I was announced the winner of one award (People’s Choice) and runner up for the other (Best Doctoral), I was quite taken aback,” Nautiyal says.

He was grateful for the support he has received from his supervisors Dr Julia Albrecht and Associate Professor Anna Carr, the Graduate Research School and the University.

Virtual prize givings will be held on Zoom in September for the New Zealand Masters 3MT National Inter-University Challenge, and in October for the Asia Pacific 3MT and Matariki Network 3MT finals.