A Vision for the Future

Many universities around the world were deliberately established away from cities or other communities. The word “campus”, which was first used in its modern sense at Princeton, evokes an image of green fields. Some have written about a “tradition of Anglo-American academic pastoralism”.

The University of Otago comes from a very different tradition. Like its forerunners in Geneva, Leiden, and Edinburgh, our University was essentially created by a lively city. The University’s first home was at the heart of the business community, in what became the Stock Exchange building. While the University moved to its present location a few years later, it has continued to be an important part of the fabric of Dunedin. 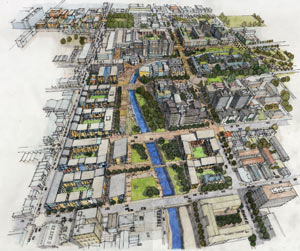 An aerial perspective of the Campus Master Plan

So the release today of a Campus Master Plan – the first since 1980 – is likely to be of interest to many Dunedin citizens as well as the University community. Indeed some of the recommendations in the plan could be implemented only with the support of bodies such as the Dunedin City Council and the Otago Regional Council.

The University commissioned an international consulting firm (DEGW) to lead a major planning exercise. The consultants brought extensive experience of campus planning and design in many parts of the world. Their brief was to produce a plan which can guide the development of our campuses in Dunedin, Christchurch, and Wellington over the next 20 or 25 years. The consultants worked in conjunction with other firms specialising in matters such as sustainability and pedestrian movement. They were also assisted by a Dunedin Architect, Mr Tim Heath.

Despite a substantial increase in capital expenditure over the last five years, all of our campuses are short of space for teaching, research, and social activities. The planners needed to take account of the likely growth of the University over the next two decades. Any projections are fraught with uncertainty, but we predicted that the student roll would grow by an average of 1.5% per year over the next 25 years. There is expected to be a greater proportional increase in postgraduate numbers, and of course the numbers of teaching and research-only staff will also increase. Based on these assumptions, the Dunedin campus would be required to accommodate nearly 7,000 more equivalent full-time students and about 500 extra staff. Even if our current needs were being met (which they are not), this would equate to a requirement for an additional gross floor area of at least 100,000 square metres. Apart from teaching space and laboratories, we will need more residential colleges, libraries, informal study space, and so on.

The consultants also made a concerted effort to understand the aspirations and goals of the University and its constituent parts. Using surveys and focus groups, they obtained the views of students and staff about the campuses as they are today, and about their vision for the future. They also met with many interested parties outside the University, including the Dunedin City Council, Otago Regional Council, Otago District Health Board, and Otago Polytechnic. 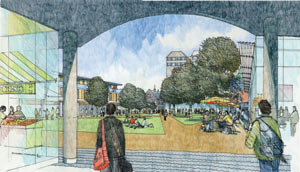 The social heart of the campus: a redesigned Union Lawn, which promotes social and interactive uses. New buildings around the Union Lawn would be low-scale to allow sunlight into public areas.

The consultants carefully examined every building and area on the campus, as well as the adjoining parts of North Dunedin. It is always intriguing to “see ourselves as others see us”. The Dunedin campus is described in the report as “a study in contrasts with a combination of exceptionally fine buildings and exquisite landscapes countered by deteriorating structures and bleak, windswept open space”. Buildings acknowledged as outstanding include not only the historic landmarks, but also contemporary buildings such as the central library (ISB) and adjacent Link Building and the Hunter Centre, which are considered to be of international significance as among the best examples of their type. Ironically, the only drawback of these facilities is that they are proving to be too popular with students.

One aspect of the plan which may be controversial is that several buildings are proposed for demolition, on the grounds that they are no longer fit for purpose or are located in the wrong place. It will be interesting to see whether the University has the resolve – as well as the necessary resources – to carry out these recommendations. Fortunately the consultants stopped short of recommending replacement of the St David Street pedestrian footbridge! 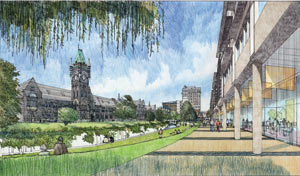 One of the many Campus Master Plan options is to replace the Science II building with a new building (right) fronting Castle Walk and linking Science I, Biochemistry, Science III and the St David Lecture Theatre.

After discussing many general issues about the campus and the city, the authors of the report analyse eight precincts of North Dunedin. The existing buildings and facilities in each precinct are described, before key projects and initiatives are proposed. In each case, architectural guidelines appropriate for the area are recommended. For example, it is suggested that buildings close to the historic core of the campus should be of a solid masonry appearance, using blue-stone.

As one of the people who worked closely with the consultants over more than a year, I must say I am excited by their vision. They have encouraged us not to “make do” with run-of-the-mill facilities, but rather to create a world-class campus which would enhance the experience of students and staff as well as the city of Dunedin. 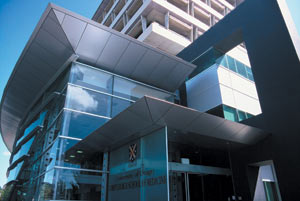 The report is well illustrated, and I expect that it will be studied by many who care about the future of our city. Three particular matters will depend on decisions by bodies outside the University.

The first of these relates to the one-way streets, with their S bends, which trisect North Dunedin. While this arrangement functions well from the viewpoint of road traffic engineering, the consultants were struck by the bleak appearance of this part of Dunedin, with the urban void and high traffic speeds that are created. Apparently many overseas cities which adopted similar designs in the 1970s have now restored two-way streets in order to improve the urban environment.

The current arrangement would be ideal if the main function of the roads was to get people from Oamaru to Balclutha. But of course the great majority of people using our roads are Dunedin residents, and the consultants recommend that the whole arrangement should now be reconsidered. 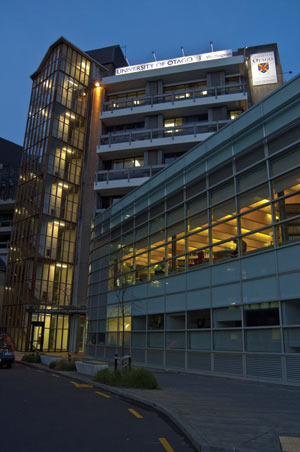 A second issue relates to the “Leith Corridor”. The Water of Leith provides a wonderful opportunity to have a natural feature with multiple recreational and ecological uses, running like a thread through North Dunedin and the campus itself. At present most of the Leith is ugly, and as it flows towards the harbour it begins to resemble an open sewer. The Otago Regional Council has developed engineering proposals to mitigate the threat of flooding from the Leith, but these have been an exercise in hydraulic modelling rather than reflecting a wider vision involving aesthetics and amenity values. The consultants argue that Dunedin has a “once in a lifetime” opportunity to deliver wider amenity values to the campus and the city.

Thirdly, the authors were shocked by the degradation of the residential areas surrounding the University. In the report they state: “While some landlords clearly care about the quality of their properties, many do not, seeming to do only the bare minimum of property maintenance and cleaning, to maximise their investment returns.” The squalid nature of many properties and the accumulation of rubbish are considered to have generated a “ghetto” feel to the neighbourhoods. Many of us have been saddened to see the deterioration of Victorian and Edwardian villas, which would be lovingly restored if they were in parts of Auckland or Wellington. The University, the Students’ Association, and the City Council are already working together in an attempt to confront such challenges, but much more needs to be done.

An important point is that this report does not yet represent University policy. While it is called a Campus Master Plan, the title on its cover (“Options for Future Campus Development”) is really more accurate. I hope the report will now be discussed extensively, not only within the University but also by other interested bodies and the wider public. Clearly key decisions will need to be taken by successive University Councils over two or three decades, but this plan provides a vision that should inform and inspire everyone involved in determining the future of the University. It is certainly an ambitious vision, but I hope we can rise to the challenge.

This opinion piece was published in the Otago Daily Times on Monday 17 May, 2010.