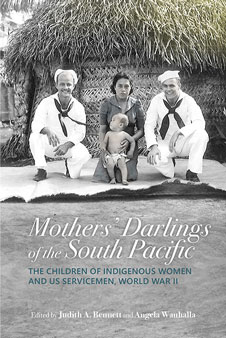 Like a human tsunami, World War II brought two million American servicemen to the South Pacific where they left a human legacy of some thousands of children. These children and their indigenous mothers have largely been absent from written histories of the war. Mothers’ Darlings breaks that silence: this is the first book to give an account of the lives of some of these children and their mothers.

“Among the clamour of war’s myriad narratives, these women and children, the most faint and ignored voices, have stories to tell,” says co-editor and Otago History Professor Judith Bennett.

“We have used oral history to capture individual voices and the rich texture of varied experiences. These oral accounts lay bare the emotional dimensions of war.”

Each chapter focuses on an island story, tracing the impact of the American forces on place, communities and families. At the centre of each island story are personal and emotional accounts of love, loss and grief. US immigration law at the time prevented couples marrying “across the colour line”.

“We wanted to know what the experiences of these mothers were during the war,’ says co-editor Associate Professor Angela Wanhalla.

“And we wanted to understand the fate of children whose birth and lives were shadowed by the circumstance of war itself. Each story is complex.”

Until now, there has been little research into the affective and generative impacts of the vast military presence on island populations.

Mothers’ Darlings, published by Otago University Press, probes a hidden history, a history that has been difficult to uncover. This ground-breaking book reveals the emotional and psychological consequences of war on indigenous populations, particularly women and children.