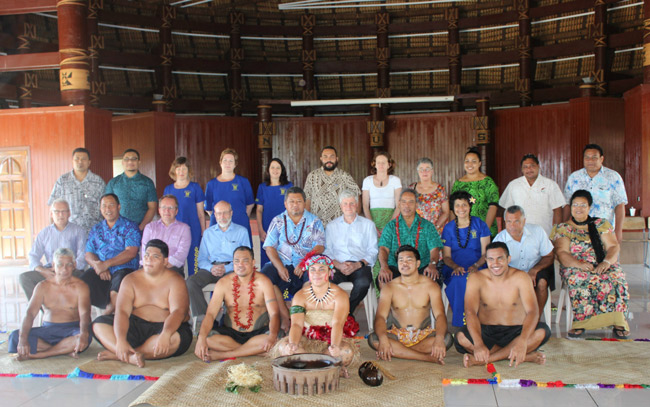 After the official Welcoming Ava ceremony from the National University of Samoa — the Vice-Chancellor of the National University of Samoa (second row, seventh from left, in green) is between Otago’s Pro-Vice-Chancellor of Health Sciences and Dean of the Faculty of Medicine Professor Peter Crampton and Otago’s Division of Health Sciences Associate Dean Pacific Faumuina Associate Professor Faafetai Sopoaga.

A recent trip to Samoa is the latest concrete demonstration of the University’s aim to contribute to the Pacific region and international progress.

Samoa requested last month’s visit to further strengthen the relationship between the Otago Medical School and the National University of Samoa’s Faculty of Medicine — to explore their joint future in teaching, research and service.

Getting to know Samoa … Professor Crampton and Associate Professor Sopoaga were part of the Otago delegation which explored the country and its culture, before the delegation’s briefing involving the National University of Samoa and National Health Services Samoa.

Otago’s delegation spent a fortnight doing everything from teaching at Samoa’s medical school and helping with staff development, to collaborating on curriculum development and visiting health facilities.

The team saw some of the challenges facing the Pacific while at Foailalo District Hospital in Savai’i when it became the first hospital to use Samoa Helicopters as an emergency service, to fly a critically ill child to the nation’s main hospital in Apia.

Medical staff feared the two-year-old girl – who was passing in and out of consciousness in the helicopter – would not have survived the alternative, a trip by road and ferry.

The Otago delegation was also involved in a series of strategic meetings, including meetings with the Prime Minister, Minister of Health, Vice-Chancellor, and a dinner hosted by Head of State, His Highness Tui Atua Tupua Tamasese Efi.

Otago’s Pro-Vice-Chancellor of Health Sciences and Dean of the Faculty of Medicine, Professor Peter Crampton, told the Samoa Observer the team was focusing on identifying how Otago could provide more support to the medical school, especially with staff exchanges, student exchanges, opportunities for collaborative research, and curriculum development.

A helicopter arrives at Foailalo rural hospital in Savaii — while the delegation was visiting — to take an extremely sick child for emergency surgery in Apia. The helicopter service is the first of its kind in Samoa.

Otago’s subsequent involvement became a very important part of rallying support for the medical school in 2014 — Otago’s support came from its senior leadership, the Pro-Vice-Chancellor of Health Sciences and the Dean of the Otago Medical School.

Now, Samoa’s Faculty of Medicine is in its second year of teaching students.

The universities of Otago and Samoa have had a Memorandum of Understanding since 2004, and Samoa Faculty of Medicine Dean Le Mamea Dr Limbo Fiu told the Samoa Observer that benefits not only medical students in Samoa, but the nation’s health sector as well.

Both universities want to ensure Samoa has robust health sciences and medicine courses, while also addressing health sector needs in Samoa and eventually the Pacific.

The delegation visited a family-owned and operated coconut oil production company which is part of Women in Business Development Incorporated — one of the local organisations Otago medical elective students can volunteer for during their placements in Samoa, as part of community engagement.

“The Memorandum of Understanding between the two institutions is a long-term relationship. This is exactly what our faculty needs, a trusted and dependable partnership.”

Otago’s Associate Professor Sopoaga says the close relationship “is made possible by the generosity of the leaders and staff of our University."

“The provision of skills, goods and services will not only enhance the health of our Pacific neighbours but will also benefit our staff and students — enhancing their understanding of Pacific people, who make up 7% of New Zealand’s total population.”

The memorandum gives Otago students priority for placements in Samoa and creates sabbatical opportunities for staff.

Samoa’s university has gifted a three-bedroom, two-bathroom, fully-furnished house on its campus in Apia to the University of Otago; for visiting academics, Otago staff on official business, and postgraduate students who are conducting approved research or elective placements.

The two universities also have a joint academic appointment — who is doing a master’s degree in Dunedin — and Otago provides funding for development awards for staff from the National University of Samoa.

The container of goods sent to Samoa was only possible because of donations from Otago’s Clinical Skills Laboratory; the linen, uniform, floor-care, first aid and hygiene supplies company Alsco Dunedin, and the Southern District Health Board.