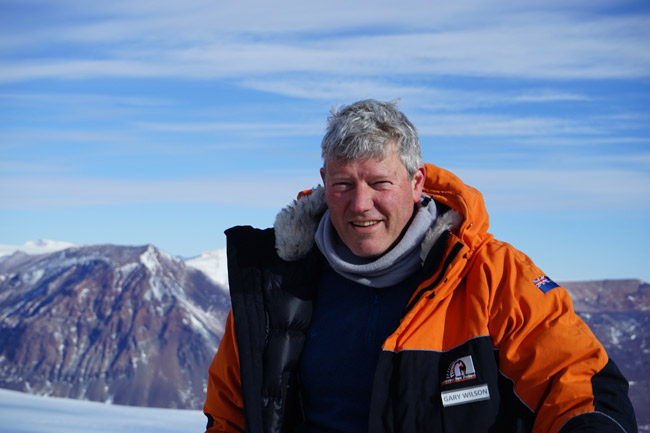 Professor Gary Wilson is honoured to have been elected Vice-President of the Scientific Committee on Antarctic Research at a crucial time for the frozen continent.

Thirty-two voting nations and a number of International Science Unions elected Professor Wilson for the four-year term as Vice-President of the Scientific Committee on Antarctic Research (SCAR).

SCAR is responsible for initiating, developing and coordinating high-quality international scientific research in Antarctica and the Southern Ocean, and on the role of the Antarctic region in the Earth system. SCAR provides independent scientific advice to organisations, particularly Antarctic Treaty Consultative meetings.

Professor Wilson told the Otago Bulletin Board he is delighted to have been elected by the SCAR member countries.

"I’m pretty honoured to have been voted into a leadership role by all the members and to have their trust and support."

“Antarctica is a very international place to work – there are more than 40 countries that work together as signatories to the Antarctic treaty and SCAR helps set the collective scientific direction. I’m pretty honoured to have been voted into a leadership role by all the members and to have their trust and support.”

“This is an excellent result and highlights the esteem in which Professor Wilson, and New Zealand, is held in the international Antarctic research community,” Dr Shanhun says.

Professor Wilson’s work at Otago has focused on marine geology and the marine geological record of ocean and climate change. Specifically, his research has included Antarctica’s role in the evolving global ocean and climate system; New Zealand’s ocean and climate response to changing forcing agents (both internal such as atmospheric carbon dioxide and ocean current reorganisation, and external such as changes in the earth’s orbital parameters); records of change in marine sediment cores; and the application of paleomagnetic and physical properties methods to dating.

"Now it’s time to start delivering some outcomes and making some changes!"

Professor Wilson says this is a crucial time for Antarctic research, with many risks around how Antarctica will change and respond as the Earth continues to warm.

“Melting ice will lead to rising global sea levels and changing temperatures in the ocean and on land will put pressure on ecosystems. Increasing human pressures on the fragile continent and its ecosystems will add to this,” he says.

“I’m keen to help develop some strategic efforts to ensure we understand these risks and impacts into the future and make sure we do something about it before the risks turn into greater impacts.”

Professor Wilson says New Zealand is making good progress on Antarctic Research and that the New Zealand government is beginning a new research fund to address those problems.

“Antarctica New Zealand has also been increasing capability to get our scientists to some of the most challenging environments to make critical measurements. Now it’s time to start delivering some outcomes and making some changes!”