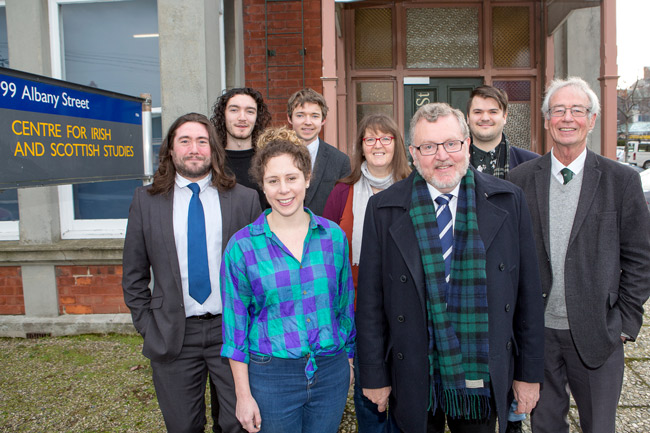 The United Kingdom Secretary of State for Scotland, the Rt Hon David Mundell MP (centre front) with staff and postgraduate students of the University of Otago's Centre for Irish and Scottish Studies. Photo: Sharron Bennett.

The United Kingdom Secretary of State for Scotland, the Rt Hon David Mundell MP, visited Otago last week – meeting with staff and postgraduate students at the University’s Centre for Irish and Scottish Studies and delivering a public lecture in Marama Hall.

Mr Mundell’s visit comes as the United Kingdom prepares to leave the European Union – a decision that was supported by only 38 per cent of Scottish people who voted in the Brexit referendum.

The University’s Eamon Cleary Chair of Irish Studies Professor Peter Kuch says the visit to the Centre, which was followed by a morning tea, provided a positive opportunity for leading academics in the University who teach, research and write about the relationships between New Zealand and the UK to question the realpolitik of what is widely acknowledged is a complex situation.

Professor Kuch says it was significant that Mr Mundell wanted to visit the Centre – the only one of its kind in the Southern Hemisphere. The Secretary of State “was impressed by the number of significant Scottish writers and events staged in the town,” he said.

To conclude his half-day visit, Mr Mundell delivered a Public Lecture at Marama Hall: A new era for Global Britain and a continuing friendship between Scotland and New Zealand – in which he examined the strong people-to-people relationships between Scotland and New Zealand, including cultural and educational links. He also discussed opportunities to increase Scottish and UK trade with New Zealand that he believed were afforded as the UK makes preparations for its departure from the European Union.

The Otago visit was part of a week-long visit Mr Mundell made to New Zealand.