Otago scientists have challenging but rewarding role in repatriation mission 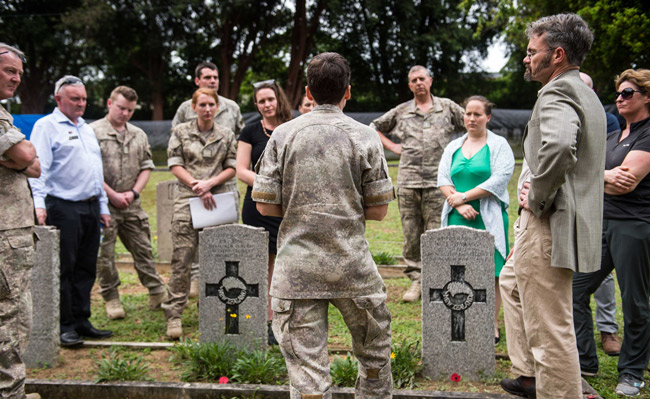 The remains of 27 New Zealand Defence Force (NZDF) personnel and one child have been reunited with their families, thanks to a team which included University of Otago archaeologists, bioarchaeologists and forensic odontologists.

The group is part of project Te Auraki (“The Return”) under which NZDF personnel buried overseas after 1 January 1955 are being brought home to New Zealand, following a change in Government policy.

The NZDF deployed an expert disinterment team to carry out the repatriation and identification process. The team was headed by Disinterment Team Leader Lieutenant Colonel Charmaine Tate, and worked alongside the Malaysian Armed Forces who provided logistic and forensic support.

"There was an overwhelming feeling of working together for a common goal that transcended personal agendas and career ambitions which can plague academic projects."

Professor Hallie Buckley of Anatomy was the lead forensic anthropologist for the disinterment team and described her involvement as “humbling, exhausting, and rewarding”.

The remains, returned at a ramp ceremony at Auckland International Airport yesterday, belonged to NZ Army soldiers who were serving in Malaysia, Thailand, and Vietnam when they died. The child was the son of a member of the NZ Army.

Along with Professor Buckley, seven other Otago scientists made up part of the disinterment team. They included Dr Peter Petchey of Anthropology and Archaeology, Drs Rachel Scott, Rebecca Kinaston and Angela Clark and Anne Marie Sohler-Snoddy of Anatomy, and Faculty of Dentistry Professors Warwick Duncan and Darryl Tong.

“All of the team is highly skilled and each played an integral part in getting the job done,” Professor Buckley says.

In order to ensure positive identification of the personnel, the bioarchaeologists and archaeologists were tasked with excavating and analysing the skeletal remains, while the forensic odontologists carried out detailed examinations, comparing remains with original dental records provided by NZDF.

The biggest challenge they faced was carrying out gruelling physical work in very hot and humid conditions. One of the highlights, however, was the Otago contingent working with the NZDF and Malaysian medical and forensic team on such a positive task.

“There was an overwhelming feeling of working together for a common goal that transcended personal agendas and career ambitions which can plague academic projects. It was an enormously gratifying and liberating experience for me,” Professor Buckley says.

The project was especially poignant for Professors Duncan and Tong as the forensic odontologists are also both senior Reserve Force officers in the NZDF.

"This project is about making sure the inequalities and inconsistencies of the past are put right and everyone is treated the same, regardless of wealth, rank or cause of death."

“The purpose of this operation was to return the remains of those who have served New Zealand abroad, to their relatives and descendants. We get a great deal of job satisfaction in achieving this and hopefully bringing some closure to these families,” Professor Duncan says.

“Both Darryl and I were grateful to be invited by the NZDF for this historic and unique operation. We both feel that our knowledge of forensic dentistry and our ability to contribute to disaster victims’ identification in New Zealand and abroad, has been considerably enhanced by the knowledge we gained during Operation Te Auraki.”

“Today we honour the memory of a child, and the sacrifice of 27 soldiers who died serving their country overseas. We’re bringing them home to their families who have waited more than 60 years for this moment,” Group Captain Nixon says.

“This project is about making sure the inequalities and inconsistencies of the past are put right and everyone is treated the same, regardless of wealth, rank or cause of death.”

The first portion of Te Auraki was completed in May, with the remains of three personnel repatriated from Fiji and American Samoa.

Planning is underway for the next two portions of the project, which will see two personnel repatriated from England in September, and two from the Republic of Korea in October.