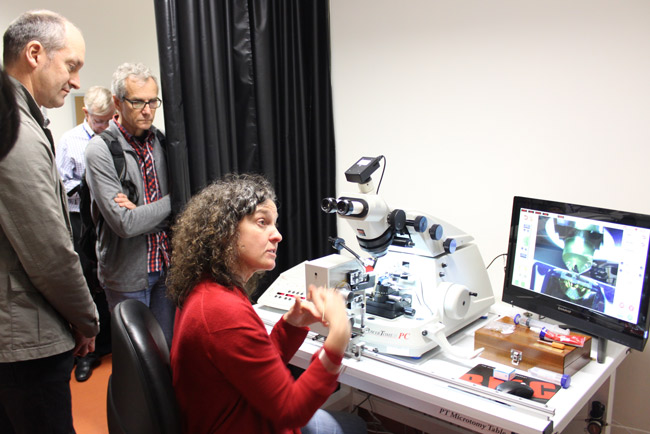 Richard Easingwood from Otago Micro and Nanoscale Imaging (left) and Rick Webb from The Centre for Microscopy and Microanalysis, University of Queensland, Brisbane (right) look on while Emma Kettle of the Children’s Medical Research Institute, Sydney, demonstrates a ATUMome (automated tape collecting system) mounted on the latest RMC ultramicrotome during the ‘Volume SEM’ workshop at the University of Sydney during last week’s International Microscopy Congress. 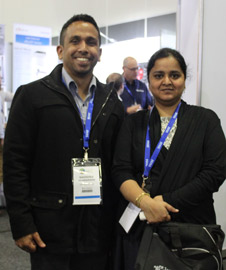 A group of Otago imaging experts travelled to Sydney last week to attend the largest Microscopy meeting on the planet.

The five-day International Microscopy Congress – unofficially called “The Olympics of Microscopy” – attracts over 2,000 registrants from around the world, and is held every four years. This was the first time it has been held in the Southern Hemisphere.

The group who attended included both academic and technical staff from the University’s newly created Otago Micro and Nanoscale Imaging (OMNI).

Manager Charlene Gell says the consolidation of Health Sciences imaging facilities provides optimal outcomes for both facility users and staff by capitalising on experience and expertise to maximise efficiency and processes.

For those who attended the conference, it represented an incredible opportunity to meet with experts from around the world.

"We also met world leaders in their respective fields, heard about the latest developments, and had hands on contact with latest technology."

“We also met world leaders in their respective fields, heard about the latest developments, and had hands on contact with latest technology.”

He adds that they also scoped out a potential purchase.

“This was a fantastic opportunity to talk to experts from the five major potential suppliers, all in the one place, and get a demo on potential instruments.”

One of the two students attending, Nadishka Jayawardena of Microbiology, says being able to attend this conference was “huge”.

“This conference definitely helped me in networking with people conducting similar research. So many people around the world perform cryo-EM as routine work and being able to meet most of them in one place was great way of learning different aspects and advancements in the field.”