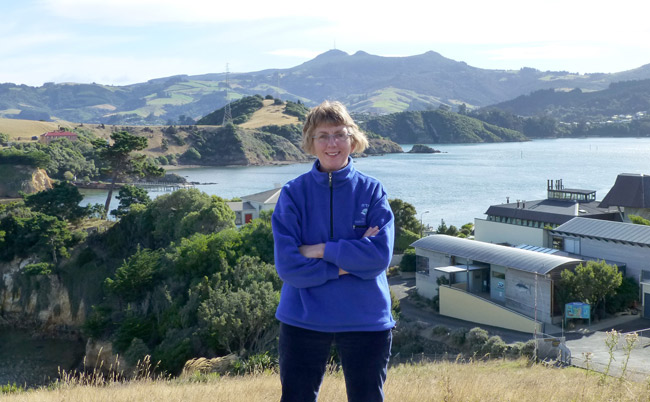 The Manager of the University of Otago’s New Zealand Marine Studies Centre (NZMSC) Tessa Mills will tomorrow hang up her “trusty blue polar fleece” for the last time when she retires after 13 years at the helm.

Mrs Mills took up the position in 2005, after seven years as the University’s Computer Training Manager at ITS.

But even before that, there was something about the Marine Lab in Portobello which drew her in.

When Mrs Mills arrived in New Zealand from the United Kingdom with her husband, Vic, and three children 21 years ago, one of the first things she did was to borrow a car, drive out to the Marine Lab wharf and take a photo to send to her friends back home.

“It was a special place to me even then, though I did not realise I would one day be lucky enough to work here,” she says.

"The staff, the NZMSC, the Department, the University and the wider community have gained in many ways from her expertise and hard work."

When the NZMSC Manager job became available, she applied – her diverse background and can-do attitude securing the role.

“Tessa can do anything! She might be dealing with a dead fish in a tank in the morning and designing a web site in the afternoon,” she says.“Everything she does – she puts her heart and soul into. Her passion, dedication and skill is second to none. The staff, the NZMSC, the Department, the University and the wider community have gained in many ways from her expertise and hard work.”

While Marine Science is not her background, Mrs Mills says working at the NZMSC has given her a passion for the marine world.

“I’ve seen seahorse babies being born, watched crayfish moulting, seen inside big sharks, and little ones, and seen whales and dolphins, sunfish, oar fish, deep sea fish and lots more. I’ve discovered that the rocky shore on our doorstep is full of marvels.

“But the job has been more than this. Being the Manager of the Marine Studies Centre gave me the opportunity to work with conservation groups, community groups and iwi, be involved with Dunedin’s tourism industry, and be part of the Peninsula community.”

Most importantly, she says she has worked with some amazing people.

Thirteen years is the longest Mrs Mills has ever worked in one place, and she has plenty to show for her time. She was a driving force behind the Marine Metre Squared project, the Aquavan and other initiatives including, most recently, getting the “fishy web cam” project off the ground.

Organising and marketing public events and holiday programmes has been a large part of her job and she says she has found it interesting to see what promotional tactics work the best.

"I’ve seen seahorse babies being born, watched crayfish moulting, seen inside big sharks, and little ones, and seen whales and dolphins, sunfish, oar fish, deep sea fish and lots more. I’ve discovered that the rocky shore on our doorstep is full of marvels."

“There are some key elements that help to grab the attention of journalists when you send out press releases – words like ‘first’, ‘biggest’, ‘rare’ and ‘sex’ for example, and ‘shark’, ‘whale’ and ‘octopus’ go down well too!”

Mrs Mills tried this out in 2009, when the NZMSC was about to release a large adult octopus back into the wild.

“I thought it would be a great idea to set it free on Valentine’s Day and advertise the fact that we were releasing it so it could go off and find its true love.”

What happened next exceeded her expectations as the story went viral and she received requests for photographs and interviews from all around the world for this romantic story.

Getting to know and be involved in the local tourist industry has been a highlight of her role. Mrs Mills has served on the board of Dunedin Host, has been the regional coordinator for Seaweek, and has helped to organise the Wild Dunedin Festival and events for the Dunedin International Science Festival.

Reaching a “milestone” birthday prompted Mrs Mills’ retirement decision, and says she will miss coming to “this beautiful place every day, and seeing all the marine life in our tanks”.

“I will particularly miss my daily interactions with all of the amazing Marine Science students - some of whom work for us on the education programme.”

However, she is looking forward to spending more time running the tourist accommodation she and Vic offer at their home in Broad Bay, working in her large garden, walking and cycling and just enjoying being on the Peninsula. And she just might pop into the Portobello Marine Lab from time to time and check on the seahorses.