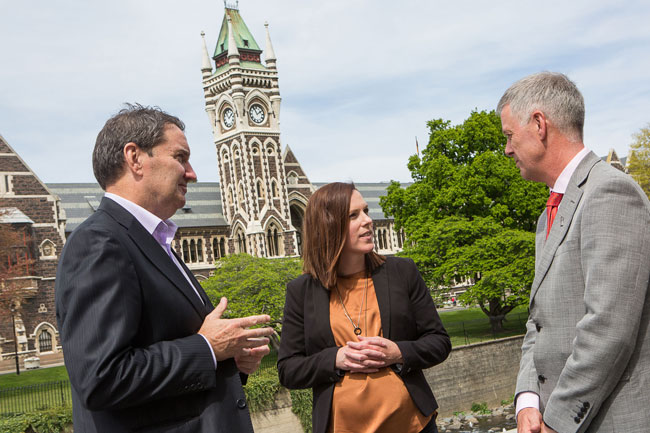 Otago researchers now have some of the fastest links with the world that New Zealand has ever seen, following the launch of the new Hawaiki Cable capability by Research and Education Advanced Network New Zealand (REANNZ) at the University on Friday.

The ultra-fast bandwidths are now six times faster than before, explains University of Otago Information Technology Services Director Mike Harte. While high definition Netflix movies stream at five megabits a second, Otago researchers’ links around the country and the globe are now up to 30 gigabits a second, and this will likely increase to 100 gigabits a second in the short-term.

Deputy Vice-Chancellor, Research and Enterprise, Professor Richard Blaikie says the “tyrannies of distance and network capacity are losing their hold” on researchers’ international collaborations, data sharing, data processing and access to resources because they can use the new Hawaiki submarine cable that links this country, Australia, Pacific islands, Hawaii and the United States.

Otago has access to the submarine cable through REANNZ. While REANNZ provides national ultra-fast networks for New Zealand’s education and research sector, it also partners with more than 120 other countries and regions around the world to provide what is effectively an international research superhighway for the Kiwis as well.

Having new ultrafast links with the world is vitally important for researchers staying at the forefront of their field and particularly exciting for researchers in specialties like genomics, radio astronomy and climate science because their work is so data intensive.

For example, some Otago researchers get the results of analysing a person’s complete set of genes (a genome) from overseas – when a genome contains the equivalent of three hundred billion letters.

Each genome contains more than three billion DNA base pairs and sequencing can reveal the order the four types of pairs appear throughout each genome, which is important because that single genome contains all the information needed to create the person and guide their growth, development and health, Professor Blaikie says.

Mr Harte says at 30 gigabits a second, researchers could receive about 70 human genomes a minute – and it would be equivalent to about 6000 people simultaneously streaming a Netflix movie in high definition.

To get such enormous amounts on and off the ultrafast superhighway, Otago had to get a new engine – Data Transfer Node software – to hurl large chunks of data down the superhighway pipeline.

Otago also worked with REANNZ to rebuild its Science DMZ, which let research data travel quickly, securely and without unnecessary check on to, along and off this specialist research superhighway.

That is a bit like having an office building concierge “who has seen you before and knows to let you in”.

These changes are all helping the University live its commitment to using Otago research for national and international good – for human health, iwi development, animal health, social and environmental well-being, and economic and commercial benefit, Mr Harte says.

The Information Technology Services Division is part of the Operations Group, which has three top priorities: