Geology in the genes for Gorman family 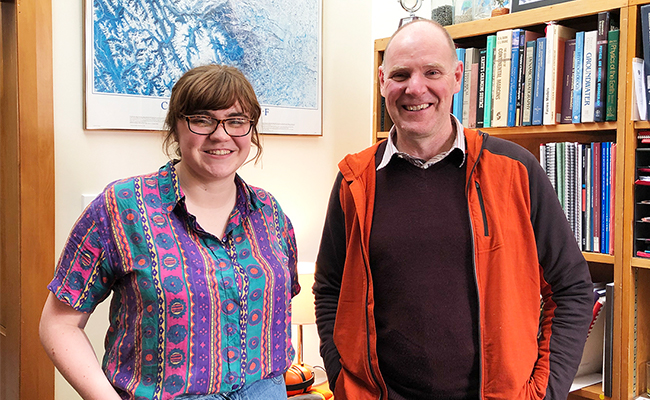 Clare Gorman and her dad Associate Professor Andrew Gorman, of the Department of Geology.

Clare Gorman was four when she moved to New Zealand from Canada when her dad and Associate Professor Andrew Gorman started a position as a lecturer in the Department of Geology.

Now 17 years later, Clare is following in her family’s footsteps and was going to graduate with a Bachelor of Science in Geology this weekend prior to this week’s cancellation.

To be graduating with a science degree still comes as a surprise for Clare however, as it was never part of her original study plans.

Even though Clare says she was “practically brought up with the Geology Department” during her childhood and teenage years, she instead had her mind set on studying law.

During her first year studying law there was scope for electives, and someone (who was not even her dad Clare quickly points out!) talked her into taking the first year Earth and Ocean Science paper EAOS111.

“I immediately fell in love with it and it became my favourite class by far,” Clare says. “The paper showed me what I should be doing.”

In the second semester Clare added a follow-on geology paper and from that point there was no turning back.

“I really enjoyed science at school but sciences like geology aren’t taught so it’s difficult to even know they exist.

“Going into the field to do science is what I really love, and the Department has such a great field programme where independent field work is supported and encouraged.”

Associate Professor Gorman says it’s been great having Clare in Geology, which even included teaching a couple of the papers she took.

But he also admires how she has handled the potential challenge of knowing most of his colleagues personally before starting.

Regarding this weekend’s cancelled graduation ceremony, Clare says it’s disappointing but that it won’t stop the celebrations.

“We are planning to have morning tea at home dressed up in our regalia complete with mandatory asparagus rolls. Later we are hoping for a socially distanced dinner and to watch the Highlanders game with family and friends.”

Clare is now taking a break while she works out her next stage, but says she is really fascinated by applying geology in a climate change context such as her dad’s research in Antarctica that she finds fascinating.

“So maybe I am following in the family footsteps of geology after all,” Clare remarks, “but I’m enjoying it so I can’t really complain.”