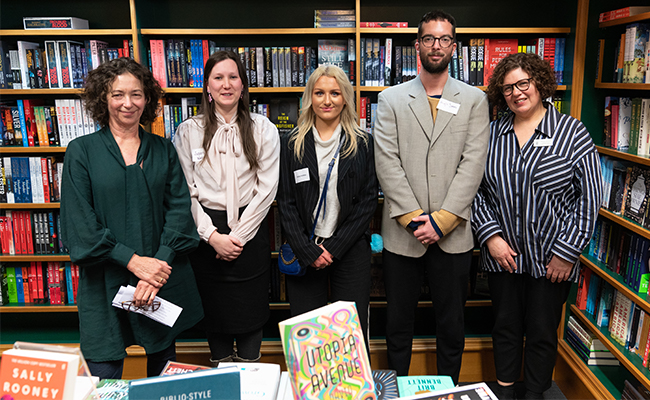 Writer, the second annual creative writing competition for staff and students, drew to a close last Thursday as the winners were announced at an event held at the University of Otago Book Shop.

Student Prose: Hugh James for The ledge is narrow…

Student Poetry: Hayley Vuleta for We the Rabbits Have Teeth

The event, attended by more than 30 staff and students, was a big success. One of the competition’s organisers Nicola Cummins, a Teaching Fellow in the English and Linguistics Programme, was delighted with the turnout.

“This event was great fun! Luckily, we were at Alert Level 1 so we were able to gather plenty of attendees, competitors and sponsors, in the fantastic book-lined venue at UBS. I enjoyed meeting people I felt I knew through their writing.”

Student poetry winner, Hayley Vuleta, had entered last years competition with a short story but felt the need to try something new.

“I’ve been writing stories since I was six years old, but this is the first poem I’ve ever written. I wanted to try something new. When I was announced I didn’t really believe it was true, I was super shocked and excited.”

I want to congratulate everyone who entered Writer 2020 for rising to the challenge of composing the world in words. The theme of this writing competition was “Only connect” and every piece entered in this competition achieved that aim. I was reached, touched and moved in many ways by reading them – stirred, agitated, saddened, elated, amused, challenged. I was particularly moved by several pieces that expressed the pain of being separated from overseas families, loved ones and familiar communities during the COVID-19 lockdown earlier this year. These pieces, among others, show how the process of writing can express irremediable loss and grief, but at the same time restore strength, resilience and hope.

“Only connect” comes from the 1910 novel Howards End by E. M. Forster. These two words are a fragment, ironically enough, of Forster’s famous quotation, which ends “Live in fragments no longer.” The whole quotation includes the sentence “Only connect the prose and the passion, and both will be exalted, and human love will be seen at its height.” Many of the entries did indeed reveal “human love at its height.” Other pieces (as will be apparent from some of my winning picks), used “only connect” to reveal what you might call human love at its lowest. Which just goes to show – as all the entries evocatively demonstrated – we humans have a lot of choice about how we put words into action.

As to how I went about choosing the winning pieces, I am sure that a different judge would have managed the sifting process in a different way, tilting the gold pan this way when I have tilted it that, leaving, eventually, a different four final nuggets in the pan. For me, though, the four winners not only winked at me from first read, but kept on winking at me through multiple reads. And after that they also survived the microscope and the loupe. They’re the real thing: multi-faceted poems and stories hewn from language, crafted to connect.

This story is a shape-shifter. Literally and metaphorically it probes the gap between appearances and reality. At its conclusion it is no longer the story that at the beginning it seemed to be. It’s a clever set-up, but even more impressive is the writer’s control of their craft across the whole length of the work, with every detail playing its part in what the American writer Flannery O’Connor described as propelling the story in every direction. One of the directions that this story takes is towards the dark. On the surface, the action of this story is fairly simple. Underneath, though, uncomfortable questions are stirred into being. Where’s the balance between audience pleasure and audience voyeurism, between playing a part and being a person, between rights and responsibility? To take it back to Forster’s quotation, “Only connect the prose and the passion, and both will be exalted, and human love will be seen at its height”, a century later this story asks a deeply serious question for our times: what, actually, are we passionate about?

Oh how I disliked the narrator of this story! Yet I couldn’t put the story down. There was no denying the compelling voice, like the steady drip of poison in my ear, an endless, uninterruptible and inarguable stream of cold logic and ‘simple reasoning’ that – oops! – lead to an explosive carnage of “unintended damage,” from which the narrator walks away unscathed, unapologetic and victorious. Like the winning story in the student category, this story takes “only connect” to the dark side. “Slow Down Please” does not miss a beat in its portrayal of reason gone wrong. This is a darkly humorous cautionary tale, a reminder that when ‘Only connect!” only means “Hit the target!” it might all end in, well, fragments.

Poetry (Student): We the Rabbits Have Teeth by Hayley Vuleta

This prose poem is alive with momentum. It’s inclusive, using the pronoun “you” to mean you, the reader, and us, all of us who share this experience. The experience in question is leaving the house wearing “a satin skirt” and “a face fully carved” and walking to university, past “jumping” open-eyed tulips, past a skateboarder with a battered, beaten board, past smiles and crunching leaves, textbooks peeking out of bags, students cha cha cha-ing through doors that breathe and fling themselves wide. The poem is kept grounded by its peppering of see-able concrete imagery (like fingerprints on the silver door handles) and held together by poetry’s musical effects – rhythm, internal rhyme, assonance, alliteration, and a glorious control of pacing. Only connect with life itself, this poem urges, although it doesn’t say it as dully as that. It gives us, instead, something irresistible: “to be is to whoosh and away with it”. It was a great pleasure to be whooshed away by We the Rabbits Have Teeth.

The clear, confident voice of this poem had me paying keen attention from its first words to its last. The language is pared back to just where it needs to be, no more and no less, each word cleanly articulated and occupying its necessary place in the poem’s sequence of words. Part of the poem is also its curated spaces of silence, interrupted along its length by what feels like bursts of speech. Taking as its focus the trans-Pacific Southern Cross Cable that connects Aotearoa New Zealand to the rest of the world, the poem itself seems a kind of “undersea communication cable” through which this tenacious, considering voice meditates on “the rivers of our voiceless voices”, our “minute metal languages” and “the things that swim through wires.” I was compelled to revisit this poem again and again. Each read was a fresh deep dive to a place of deep, capacious listening. You can’t ask more from a poem – or from Alexander Bell – than that.

“Only connect! That was the whole of her sermon. Only connect the prose and the passion, and both will be exalted, and human love will be seen at its height. Live in fragments no longer.”