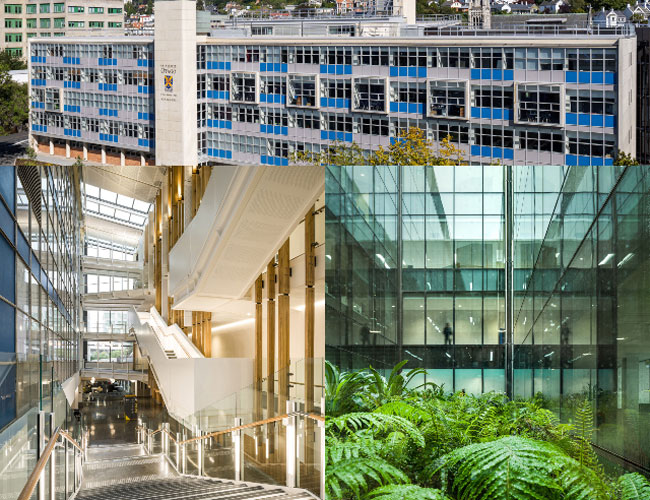 The Faculty of Dentistry project (clockwise from top): the refurbished Walsh Building, the Clinical Services Building light well and the atrium linking the two buildings, with the Walsh Building rear façade on left.

They were both winners at this year’s Te Kāhui Whaihanga New Zealand Institute of Architects’ Southern awards in the education category, which means they are also automatic entries in the national awards that will be announced in November.

The dental project involved constructing a dental teaching hospital and extensively refurbishing the historic Walsh Building for staff, students, and research – while also creating an atrium to link the two, as the heart of the Faculty of Dentistry in Great King Street.

The award citation for the Jasmax-designed project started by saying: “The revitalisation of this existing modernist building acknowledges its pedigree by replicating the geometry of the original curtain wall in a new street façade, while retaining the original facing into the new atrium.

“This atrium – which inserts itself full-height between the existing building and new extension – floods daylight into both interiors.

“Bridges across the atrium at all levels allow orientation and connection between the different parts of the school, while enabling informal chance encounters.

“Intense white surfaces further enhance the brilliance of the interior, while also recalling the ‘whiter than white’ toothpaste commercials of the past,” the citation says.

Then and now dentally

Campus Development Division Director Tanya Syddall says a fierce commitment was maintained to the Category 1 listed Walsh Building while upgrading extensively to reflect advances in construction, technology, and education in the past 60 years.

“The use of colour and art through sculpture and mosaic as an integral part of the design are strong contributors to the significance of the building,” Heritage New Zealand says. 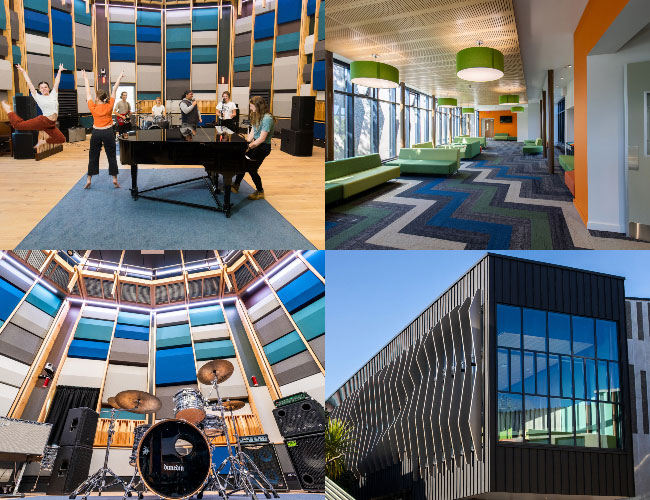 The award citation for the Performing Arts Centre in Union Street East says the inspiration for the project was “attempting to capture the integration of music and performing arts teaching”.

“Its essence has come alive in the recording studios, where vibrant colour and acoustic panels in a pixelated arrangement express the technical sonic atmosphere within.”

Placing the studios along the river means the students’ area open out to the north, letting “the energy and music of this new learning space to spill outdoors and enliven the campus”.

The Resene Colour Award citation says: “With orchestrated tones and base notes, this building vibrates with a satisfying palette of colours.”

The new recording studios building – designed by CCM Architects Baker Garden Architects – helped consolidate the School of Performing Arts instead of staff, students and activities being spread around about 10 locations on campus.