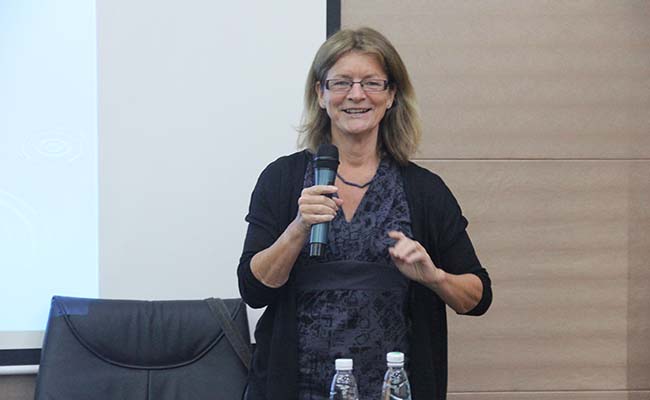 A well-deserved commendation according to her students who describe her as “an inspiration” and “profoundly thoughtful” as she makes “a classroom learning experience enriched with an abundance of unique understandings from around the world”.

“I foster a collaborative partnership approach to teaching and learning in my classes, so that my students develop an empathetic awareness of different perspectives, as well as a deep understanding of their own underlying assumptions and unconscious biases.”

With a goal to promote global citizenship, challenge Western-centric practices and motivate learners to have a transformational attitude, Professor Tucker discusses how receiving the prize has made her feel and how it will shape her teaching moving forward.

“I’m absolutely delighted to have won this award as it has reinforced my passion for the difference we can make as educators and confirmed that I’m on the right track”.

“Winning this will motivate me to keep honing my teaching skills and also, hopefully, it will enable me to take more of a leadership role in mentoring and encouraging others to believe in the transformative role we can play for students and for society.”

Professor Tucker believes in the importance of “developing a deep sense of global citizenship amongst her students” and a “belief that they can make a difference in the world”.

“I foster a collaborative partnership approach to teaching and learning in my classes, so that my students develop an empathetic awareness of different perspectives, as well as a deep understanding of their own underlying assumptions and unconscious biases.”

Originally from Edinburgh, Professor Tucker began educating many years ago by teaching English to other-language speakers across the globe. This six-year teaching period had her travel and work in Turkey, Singapore and Japan before coming to New Zealand in 2000 to teach Tourism.

“I have taught at a range of levels from undergraduate courses to extensive PhD supervision, but it would be fair to say that I have truly found my passion for teaching since becoming heavily involved in the Masters of Tourism during the past 10 years,” Professor Tucker says.

“I first became interested in tourism as a social phenomenon when I took a course on the Anthropology of social change during my Masters and I took that interest into my PhD."

“Currently, my research investigates tourism’s influence on socio-cultural change and, over the years, I’ve focused on issues including gender inequality in tourism, poverty alleviation, heritage values, and the ability for tourism to enhance empathy and cross-cultural understanding.”

She is currently writing a book about her longitudinal study of tourism and social change in the Cappadocia region of Turkey.

*The National Teaching Excellence Awards promote and celebrate teaching excellence in the tertiary sector across New Zealand. Of the six awards on offer, four were won by University of Otago academic staff, with two of these awards coming from the University’s Business School. Each university is also limited to only four applicants, meaning University of Otago academics claimed all four of the awards they submitted for. A rousing success for the staff themselves, the institution and the wider Otago region. Professor Tucker and the other three award recipients will be formally celebrated at a special ceremony on the 21 September.